Rain, snow, or summer heat hockey never stops here in the Northland. In the summer local prep teams are gearing up for the next season.

Most hockey players and parents know summer is when you put in the work for the winter. No team knows that better than the Proctor Rails, as the squad just began their Rails Hockey Development Training Camp which begins bright and early.

“We come in the morning and the boys work from 7 a.m.- 8 a.m. on the turf with our trainer. They then come to the rink and do an 8:30 a.m-10 a.m. on ice session with our varsity staff and guest college or junior coach. Then they finish the day at the fitness center, so it’s a pretty busy off-season for the guys,” said Proctor Head Coach Jeff Laspi.

The team through the summer month and season work in conjunction with the St.Luke’s Proctor Fitness Center. That helps them incorporate a variety of different workouts, on and off the ice.

“We have our strength and condition along with skating program this summer. We do turf time, skating and then lifts after. It definitely helps us being able to keep in shape all summer, and being more conditioned on and off the ice,” claimed Rails forward Frank Amendola. 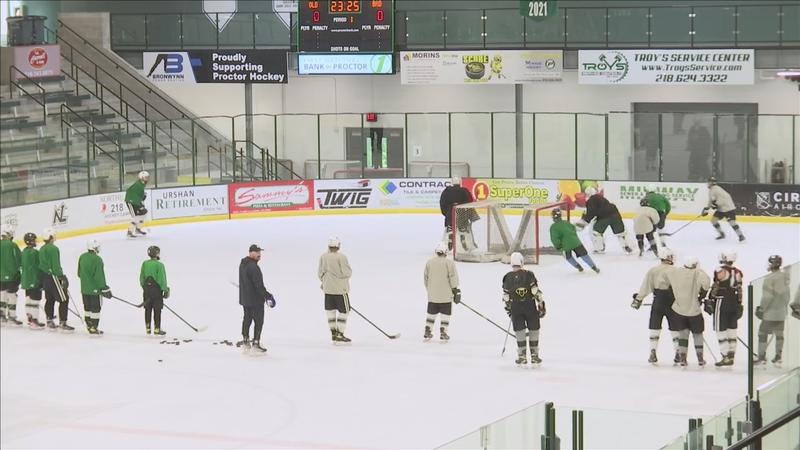 Not only does the team grow physically stronger, they also use this opportunity to bond with each other personally as teammates.

“It gives us a lot actually because most people don’t think too much of it. It gives us a lot of team chemistry knowing what everyone can do in this pre-camp, then going into the season,” exclaimed Proctor goalie Blake Imhoff

For head coach Jeff Laspi, not only is this a great way for his team to grow more confident but also all Proctor athletic programs.

“The biggest thing with our programs to you can see it. A lot of our programs have gone to state this year, and have in recent years. That is in part to partnering with St. Luke’s and getting that strength and conditioning piece in our school. During the day, and after with our strength trainers so it has helped build our programs. Making them top section teams, and state competitors in multiple male and female sports,” concluded Laspi.

The camp runs Mondays, Tuesdays, and Thursdays through July 30th.