The season’s first saltie arrives in the Twin Ports

It’s a sure sign of spring. The first oceangoing vessel of the 2022 maritime shipping season has arrived in the Port of Duluth. The Resko, a 624-foot bulk carrier from the Polsteam fleet, earns the 2022 First Ship honor when is sailed in about 6:30 p.m. on Wednesday, April 13. According to the Duluth Seaway Port Authority, the Resko will visit Superior’s Gavilon Grain Connors Point Terminal to load approximately 16,200 short tons of spring wheat and 5,400 short tons of durum wheat destined for Italy.

Despite the wind, rain and snow, people gathered along the canal to watch the ship glide through the ice. The arrival of the first saltie officially kicks off the shipping season in the Twin Ports.

According to the Port Authority, Resko’s journey originated in Ijmuiden, Netherlands. It unloaded more than 5,500 short tons of steel skidded coils in Milwaukee, and also made a stop in Burns Harbor, Indiana.

“Despite winter’s lingering chill this year, arrival of the season’s first full Seaway transit is a true sign of spring and always of the prosperity these great ships help deliver to our region,” Deb DeLuca, executive director of the Duluth Seaway Port Authority said in a press release. “We’re excited to see it and excited also to share its Midwestern wheat cargo with the world. It’s another example of how Great Lakes-St. Lawrence Seaway shipping delivers the critical goods and raw materials of everyday life.” 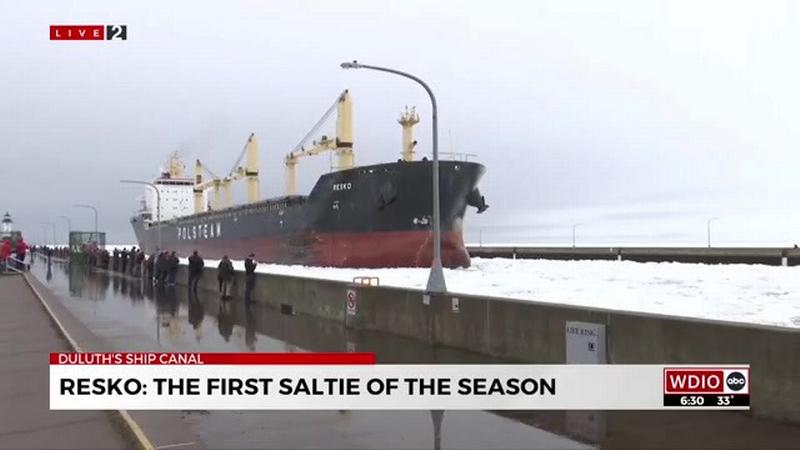 The Resko, a 624-foot bulk carrier from the Polsteam fleet, earns the 2022 First Ship honor.[WDIO]

Resko is sailing under the Bahamas flag and is captained by Lukasz Pionke of Poland. The ship was built in 2010. Its carrying capacity is approximately 33,000 short tons.