The first saltie of the shipping season award goes to Resko, a 624-foot bulk carrier from the Polsteam fleet. On Friday, April 15th, the Twin Ports community held a ceremony to welcome everyone on the ship to the city. The captain of the Resko, Lukask Pionke expressed his feelings as he received First Ship honors. “I’m happy! This is the first time for me!”

Before arriving, the Resko stopped in Milwaukee, Wisconsin, where more than 5,500 short tons of steel skidded coils were unloaded. Resko’s journey started in Ijmuiden, Netherlands, and included a stop in Burns Harbor, Indiana.

When Resko arrived, it was cold, windy, raining, and snowing. When it comes to the weather we have been having with the wind and snow, Captain Pionke spoke about whether it has been an issue for them since they docked. “No, I worry about the winds during the preparations, but on the line, this wind for us is not going to be a problem.”

But their trip became a little rocky at one point. "We had some rough weather from the Atlantic, but it was good,” said Captain Pionke. 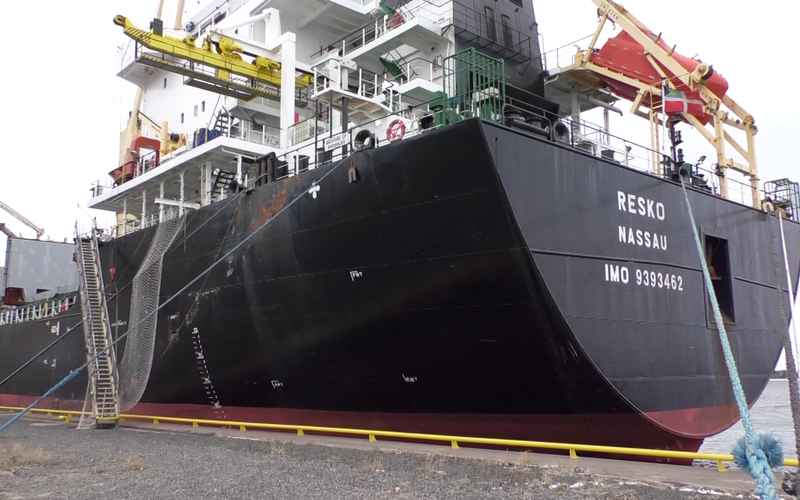 The Resko will loading up  around 21,600 short tons of wheat to deliver to Italy.[WDIO, File]

As the pandemic seems to bring some normalcy back to the economy and our daily lives, some industries continue to struggle, especially with supply chains and demands. "Things are not coming to normalcy in the world of shipping. It is still global supply change disruptions, DeLuca shared. It started with covid and surges of demands and supply not being able to meet that, and the war on Ukraine has added a whole another twist. So we kind of do not know what to expect from the season, especially with grain.

When salties and even lakers come in and out of Duluth it is not only a joy to see, but it also brings represents economic activities as well. "Even though we are always a port city, it Is easy to forget that these ships represent commerce. They represent commerce and economic activities in the regions, says DeLuca. So, as much as they are beautiful to look at, they bring tourism. Shipping is a number one economy in the region, and the ships represent that well.”