When you hear the name Hermantown Hawks, your mind immediately thinks hockey. For Karlyn Nessa however, she’s changing the tape by dancing from humble beginnings at Corey Veech Memorial Field. To this year, U.S. Bank Stadium, becoming a professional cheerleader with the Minnesota Vikings.

“I started dancing when I was two years old. My parents put me in dance by the time I could move. They always told me I was always, moving around. So they put me in dance Classes. Then I was at a studio growing up my whole life and at the Minnesota Ballet for a few years,” said Karlyn Nessa.

From there she went to the University of Saint Thomas and continued performing at a high level.

“We got four national championships as a team together when I was on there. Then I tried out for Vikings this past May and made it, so pretty much been dancing for the past 19 years nonstop.”

The process to get on the Vikings squad wasn’t easy. From submitting applications, learning routines and filming yourself completing the dances. All in preparation for a two week training camp.

Luckily there was a lot of familiarity going into this new experience for Nessa. 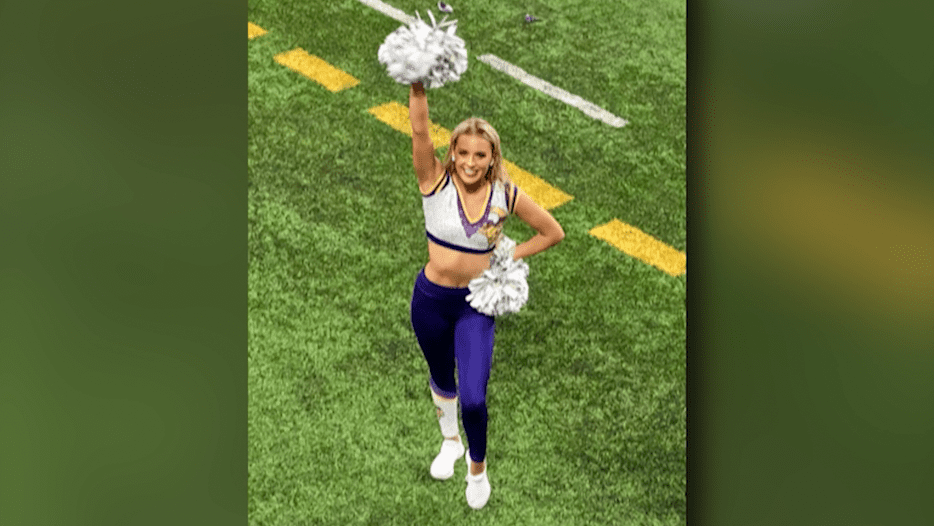 For a born and raised Vikings fan, the experience has been a dream come true.

“It was super exciting I had to like control myself. It still really hasn’t hit me. Like, I’ve already had a preseason game, but I don’t know, it’s just like everything about it is like a dream. Come true and like so amazing. So I think hopefully like home opener all, I’d go out there and be like, Oh my gosh, this is insane, it’s been a dream so far,” added Nessa.

A dream made possible by those that support her and a quote that Karlyn lives by.

“Just keep pushing for like the next thing, like dance team was amazing and like I was like this is incredible. And I have championships with them, but I was like, what can I do next? The Vikings were the next step for me.”

“My parents are like my best friends in the whole world. They have done everything they can for me.

They’re just my biggest supporters. They come down for as many games as they can, and they’re always there cheering me on,” Nessa concluded.