When the wind does what we want, we don’t give it a second thought. But if we’re counting on the wind to do one thing and it does the other, it can ruin plans. To forecast for wind, we must first understand the driving force behind it; differences in pressure.

Let’s start with a can of soda. The key concept is that air pressure is always trying to reach a state of equilibrium. Wind is formed in an attempt to restore balance from differences in air pressure. In this case, between the inside and outside of the can. Once the pressure is equalized, the wind will stop. If we shake the can, we increase the pressure inside it. The greater the difference in pressure, the stronger the wind.

The same is true on a global scale. If the high and low pressure systems are both rather weak, the small change in pressure leads to weak winds. But if there’s a large change in pressure, strong winds develop between the two systems.

In the Twin Ports, the wind plays an even greater role in the forecast because we’re next to a large body of water. Our wind isn’t only influenced by highs and lows on the global scale. We have to account for a lake breeze, especially in the spring.

The driving force behind the lake breeze is the difference in temperature between the land and the water. Land heats much faster than water. As of May 11th, the average surface temperature of Lake Superior is still about 36 degrees. As the land warms well past that, air rises and leads to low pressure at the surface. 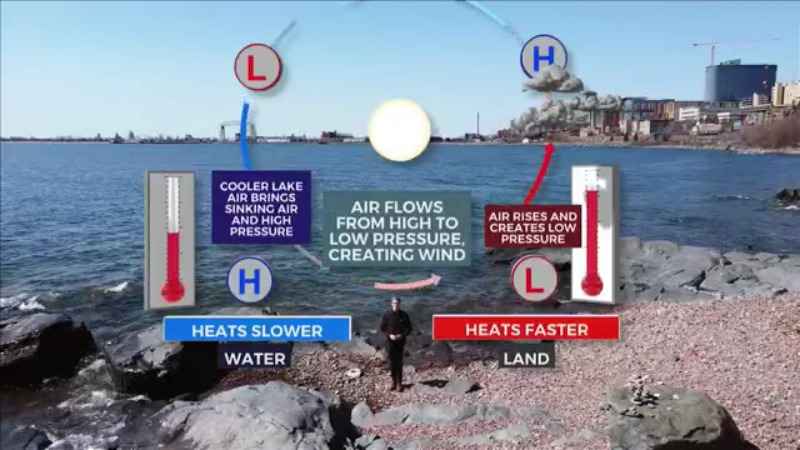 Colder air is denser. Cooler lake air causes sinking with high pressure over the water. Remember our key concept; air wants to maintain a state of equilibrium. That’s why air flows from high to low pressure. This circulation creates wind.

The lake breeze is the strongest when the temperature difference between land and water is the greatest. That’s why the late afternoon leads to the strongest winds near the shoreline.