Imagine being in a rock climbing competition two and a half hours from home, driving back and attending your high school prom all in the same day. Well that’s exactly what one Duluth Denfeld climber experienced.

Hartley Bauer has been rock climbing for seven plus years. While the sport is never easy, she has gotten better throughout her career. Qualifying for nationals this season in both bouldering and lead climbing.

“I have just been climbing for a long time now. I recently did the math and figured out I have been climbing for 8 years and I have always done both disciplines equally. Being on the team you are forced to play in all areas. Every year I have been competing it’s been creeping up and up just a little bit like I used to never make it to divisional, so it’s been a journey,” said Bauer.

A journey that is not yet over this year, as she now is preparing for nationals in Chicago, coming up on the last week of July.

“This is my third time qualifying for Nationals, and every time I just break down and cry, because it is so overwhelming to realize I’ve come that far. Just the feeling of Nationals is super exciting because you feel like you’ve made it,” continued Bauer.

Not only is it rewarding for Bauer to make it to the highest level, but also her coaches at Vertical Endeavors. 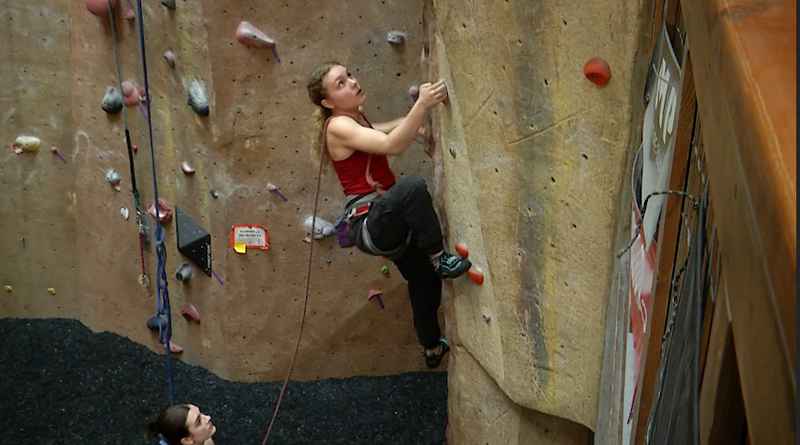 Although climbing mountains both physically and mentally can be daunting. It’s a sport, as well as experience that Bauer wouldn’t trade for the world.

“I have always said that I’ve liked the adrenaline, like the feeling of being on a wall used to be scary. It still is scary a lot of the time, but it has its moments where you just feel like you’re free. I don’t think I could ever find a sport that makes me feel as free and excited as climbing does,” concluded Bauer.