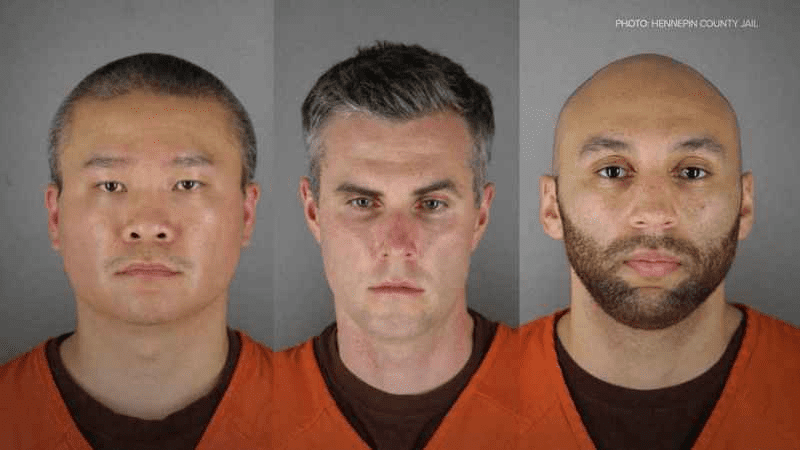 ST. PAUL, Minn. (AP) — Witness testimony gets underway in earnest at the federal civil rights trial of three former Minneapolis police officers accused of failing to intervene as fellow Officer Derek Chauvin killed George Floyd. Officers J. Alexander Kueng, Thomas Lane and Tou Thao were at the scene May 25, 2020, as Chauvin pinned Floyd’s neck to the ground with his knee for 9 1/2 minutes as the Black man was facedown in handcuffs and gasping for air.

Chauvin was convicted last year of murder and pleaded guilty to a federal count of violating Floyd’s civil rights. The other officers are broadly charged with depriving Floyd of his civil rights while acting under government authority.

The first full day of witness testimony began on Tuesday with prosecutors playing more videos for the jurors. Hubbard Broadcasting sister-station 5 Eyewitness News has a reporter inside the courtroom. Cameras are not allowed in the courtroom for this trial.

Prosecutors played 30 minutes of Kueng’s body camera video from the moment he arrived at the scene. He’s heard telling Floyd, “We’re going to sort all of this out, alright?” and asking if Floyd is “on something because you’re acting real erratic.”

The video also showed Kueng not checking Floyd’s wrist for a pulse until the officers had been kneeling on Floyd for over six minutes.

After Floyd was loaded in the ambulance, Kueng was the officer who went into Cup Foods, talked with the manager about the counterfeit bill and what happened when Floyd was in the store.

Thao’s bodycam video caught him telling a forming crowd on the sidewalk, “This is why you don’t do drugs kids,” as Floyd was on the ground with the officers on top of him.

Judge Magnuson called for a morning break at 10:47 a.m. before the defense takes over questioning the witness Kimberly Meline, an FBI forensic video examiner who synchronized the videos.

The second witness to take the stand was Christopher Martin, who worked at Cup Foods on May 25, 2020. Martin said he was the employee who accepted the bill he assumed was fake from Floyd, noting he didn’t think Floyd knew it was fake because he seemed high.

Martin and a couple of his coworkers went to Floyd’s vehicle to try to get Floyd and the others to come back inside the store twice but they refused. A store employee then called the police.

Martin also testified that he later heard the crowd of people yelling at Thao to “check his pulse” and saw Thao push two people back onto the sidewalk. Martin said when he looked at Floyd, he looked “dead.”

Judge Magnuson called for a lunch break before the defense cross-examines Martin.

Court is set to reconvene around 2 p.m.

After Tuesday’s lunch break, defense attorneys got their chance to cross-examine Martin. Martin confirmed to Thao’s attorney that Thao only pushed his coworker because his coworker didn’t listen to Thao’s command to get off the street and onto the sidewalk.

Kueng’s attorney got Martin to confirm 38th Street and Chicago Avenue is a high-crime area and Martin’s manager carried a gun in his pocket.

The next witness called was Charles McMillian, who said he pulled over and watched the situation unfold because he was “being nosy.”

McMillian described for jurors what he saw, noting he told Floyd to just get in the squad car before officers pinned Floyd to the ground but Floyd responded that he’s claustrophobic and wanted to sit in the front of the squad car.

He further explained his concern when officers took Floyd to the ground.

Wiping his eyes, McMillian explained he told officers to “let (Floyd) breathe” when he was pinned to the ground. He also noticed Chauvin’s knee on Floyd’s neck.

“My concern was that I knew something bad was gonna happen to Mr. Floyd … he was gonna die,” McMillian said of his thought upon seeing Chauvin’s knee on Floyd’s neck.

As the situation continued, McMillian said, “My concern increased because I kept hearing this man beg for help.” When asked if officers offered Floyd any help, McMillian said they gave none.

However, the defense attorneys asked if McMillian heard any officers request an ambulance, check for Floyd’s pulse, report they found no pulse, do chest compressions or suggest rolling Floyd on his side — all things Lane and Kueng (checking pulse) did — and McMillian said he didn’t hear any of that.

The final witness for the day was Minneapolis 911 dispatcher Jenna Scurry, who testified that officers didn’t relay much information to her that night.

Scurry said officers never relayed information that anyone was having trouble breathing, was unconscious, without a pulse or even being restrained. They also didn’t request a rescue squad, which typically responds to a scene quicker than just a normal ambulance request.

“My concerns were something had been wrong, whether that be with the officers or the situation,” she said about the lack of information after noticing a traffic camera at the intersection showed the officers on the ground. She also relayed those concerns to the officers’ on-duty sergeant.

Testimony will continue for a second full day on Wednesday, starting at 9:30 a.m.