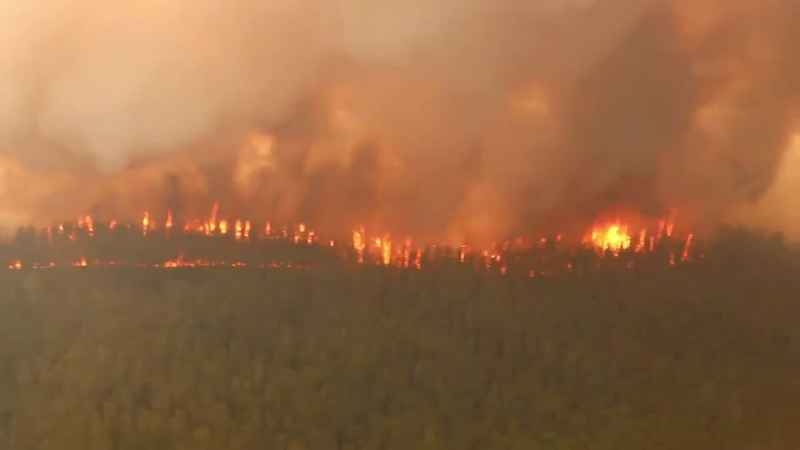 The Red Lake 68 Fire, seen on July 12, is among dozens burning in Northwestern Ontario.[Ontario Ministry of Natural Resources]

Ontario’s Ministry of Natural Resources and Forestry says there were a total of 166 active fires in Northwestern Ontario as of Wednesday evening. It said the fire hazard is high to extreme in the Red Lake, Dryden, and Sioux Lookout areas.

Emergency Management Ontario said Wednesday that people were being evacuated by plane from North Spirit Lake and Cat Lake First Nations. Officials had said that more than 2,600 people had already been evacuated from Pikangikum, Poplar Hill, and Deer Lake First Nations.

Thunder Bay and Dryden are among the locations serving as host communities for the evacuees.

What may be the region’s largest fire has burned 136,361 hectares (336,955 acres) along the Ontario-Manitoba border northwest of Kenora, in and near Woodland Caribou Provincial Park. CTV News reported that four First Nations communities in eastern Manitoba were being evacuated due to smoke and wildfires.

Closer to the U.S. border, a half-dozen fires remained active in Quetico Provincial Park as of Wednesday and have burned a combined 3,212 hectares (7,937 acres). Some have been considered active for more than a month.

In addition to the evacuations, officials have also restricted access to some roads and government lands, and numerous advisories have been issued for smoke along highways.

Year-to-date, Ontario has seen 759 wildfires, compared with 421 last year and a ten-year average of 472.

This video shows conditions on the #RedLake68 #ForestFire on July 12. Fire updates and travel restrictions in place in the Red Lake district available at: https://t.co/XPnoZFTS24 pic.twitter.com/VA0MtTkKh0