The Duluth Huskies were in the 6th inning of their road match in Waterloo Monday night when they learned that the Eau Claire Express won their first half finale over St. Cloud 9-8 to go up a half a game on them for first place in the Great Plains East.

The Huskies however would stay composed and roll past the Bucks 8-3 to secure their program’s first-ever Northwoods League first half sub-division title in their 20 year history.

"It feels really good and everybody was really excited," Duluth outfielder Hudson Sapp shared. "It takes a little bit of weight off our shoulders knowing we’re already in the playoffs. It makes it better that even though we won we earned it, we didn’t just, [if] they lost, got it given to us."

The tired team rolled home around 4am Tuesday morning only to be met by the excited kazoo calls of proud team owner Michael Rosenzweig.

Now, with a playoff berth secured, the Huskies are focused on building positional strength. 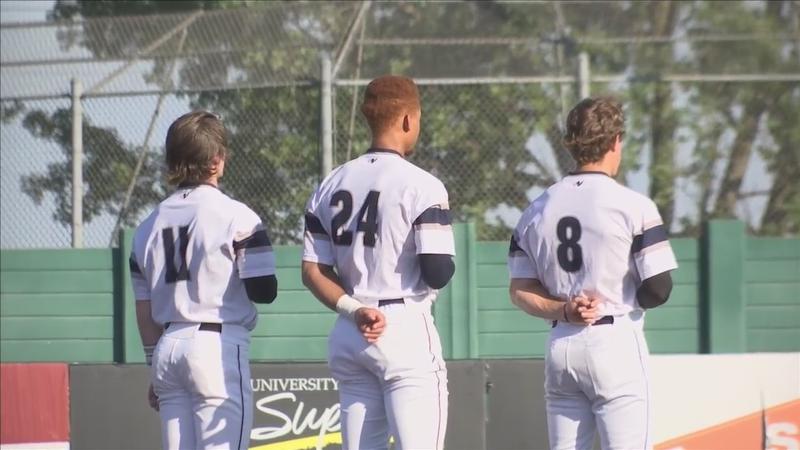 Members of the Duluth Huskies line up for the national anthem.[WDIO/Erik Johnson.]

"Your temp contracts are done, your first half contracts are done, you’re starting to bring in some of your Division I players that might have been on the road to the College World Series," Huskies general manager Greg Culver explained. "We can focus on players, we can focus on getting ready for the playoffs. The second half is actually going to be a difficult schedule, of our 14 games in July eight of them are against ranked opponents."

The Huskies will open their second half slate Wednesday hosting the Bismarck Larks. First pitch is set for 6:35pm at Wade Stadium.