On Friday afternoon top-seeded Hermantown (28-2) would face off against fifth seeded Alexandria (20-7-2) for a shot at punching their ticket to the Class A Minnesota State High School boys hockey championship game. This is the second time the two teams have met in the state semifinals since the 2017-2018 season, when the Cardinals earned the 6-1 win.

In this Class A semifinal match Hermantown would claim the 7-1 victory at the Xcel Energy Center in St. Paul. They’ll face second seeded Warroad (26-3-1) , who defeated Mahtomedi 5-4 in overtime to advance, in the title game Saturday at noon. Catch that match and the Class AA championship Saturday at 7pm on WDIO.

The Cardinals would open Friday with a goal from Tyler Kludt two minutes into the first period. This would be the first time Hermantown had trailed a game since their regular season finale in Grand Rapids on February 15. The Hawks responded as Joshua Kauppinen would tie it up 1-1 with 7 minutes left in the first. Then Ty Hanson would give Hermantown their first lead of the day, with Kade Kohanski tacking on another power play goal to secure the 3-1 lead after the first period.

RELATED: Follow the brackets: Class A and Class AA 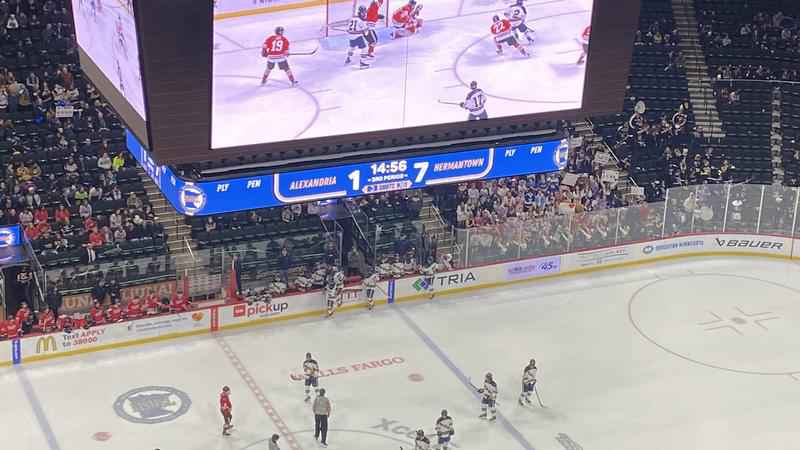 Halfway through the second period Gavin Blomdahl extended Hermantown’s lead 4-1. Max Plante added insurance with a power play goal, as the Hawks went three for four on the man advantage. Dallas Vieau finished for the 6-1 lead after the second.

In the third period Dominic Thomas would score, creating the six goal lead to begin running time with 14:30 to go in the game.

The Hawks would outshoot the Cardinals 42-7 with seven different scorers, and Dane Callaway in net, to secure the 7-1 win.

RELATED STORY: Hermantown advances to semifinals with a win over New Prague