One of the Warriors’ only three losses on the regular season came at the hands of the Hawks on January 15. In overtime Gavin Blomdahl would net the game winner at home to earn the 2-1 victory. The sole goal Hermantown allowed that night was on the power play.

Meanwhile the Warriors proved to have a tough semifinal test in Mahtomedi, beating the Zephyrs 5-4 in overtime. Both Hermantown and Warroad outshot their opponents Friday, the Hawks 42-7 and the Warriors 40-22.

Warroad has put up 173 goals this season second in the entire state only to Hermantown with 177. 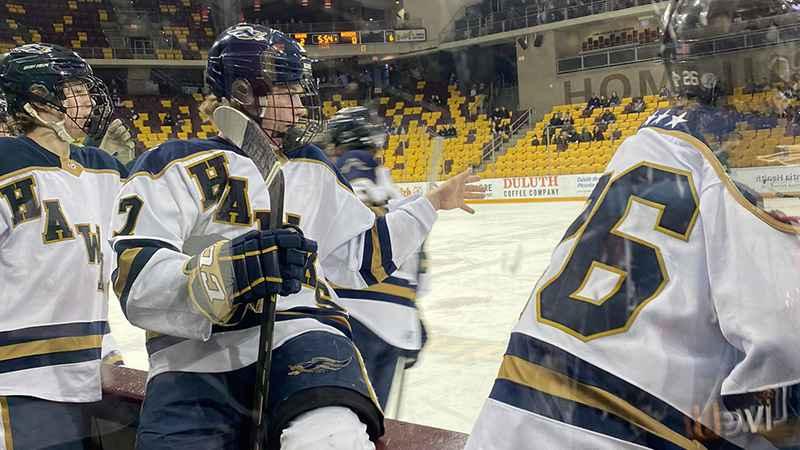 The Hermantown Hawks advance to the Section 7A Championship game with their 6-0 win over the Greenway Raiders.[WDIO]

The Hawks noted they bring a tough line with Max Plante, Zam Plante, and Ty Hanson to combat the Warriors’ Daimon Gardner and Jayson Shaugabay. Gardner is 4th in the state in points with 83 and Shaugabay is tied for 5th with 81. Max Plante is tied for 13th with 70 points and is 4th in assists with 52.

Hermantown senior forward Dominic Thomas said it will come down to whichever team has more depth to pull ahead. The Hawks shared that they plan to take the match one shift at a time, and tap into their strong defensive core.

This will mark Hermantown’s second Class A championship appearance in three seasons, and Warroad’s first since 2009.

Puck drop in the Class A final on Saturday is set for Noon at the Xcel Energy Center in St. Paul, or on WDIO.