Standing at the Piedmont Community Center with dozens of supporters behind him, Roger Reinert made it official. He will run for mayor of Duluth.

The campaign slogan is “Expect More. Do Better.”

He said, “We need a culture in city hall that is less, We have all the answers, and more, How do we get to yes?”

Reinert has served on the city council and in both houses of the Minnesota legislature.

Plus, he’s helped the DECC when they needed leadership. And he’s a combat veteran, and current officer with the U.S. Naval Reserve. 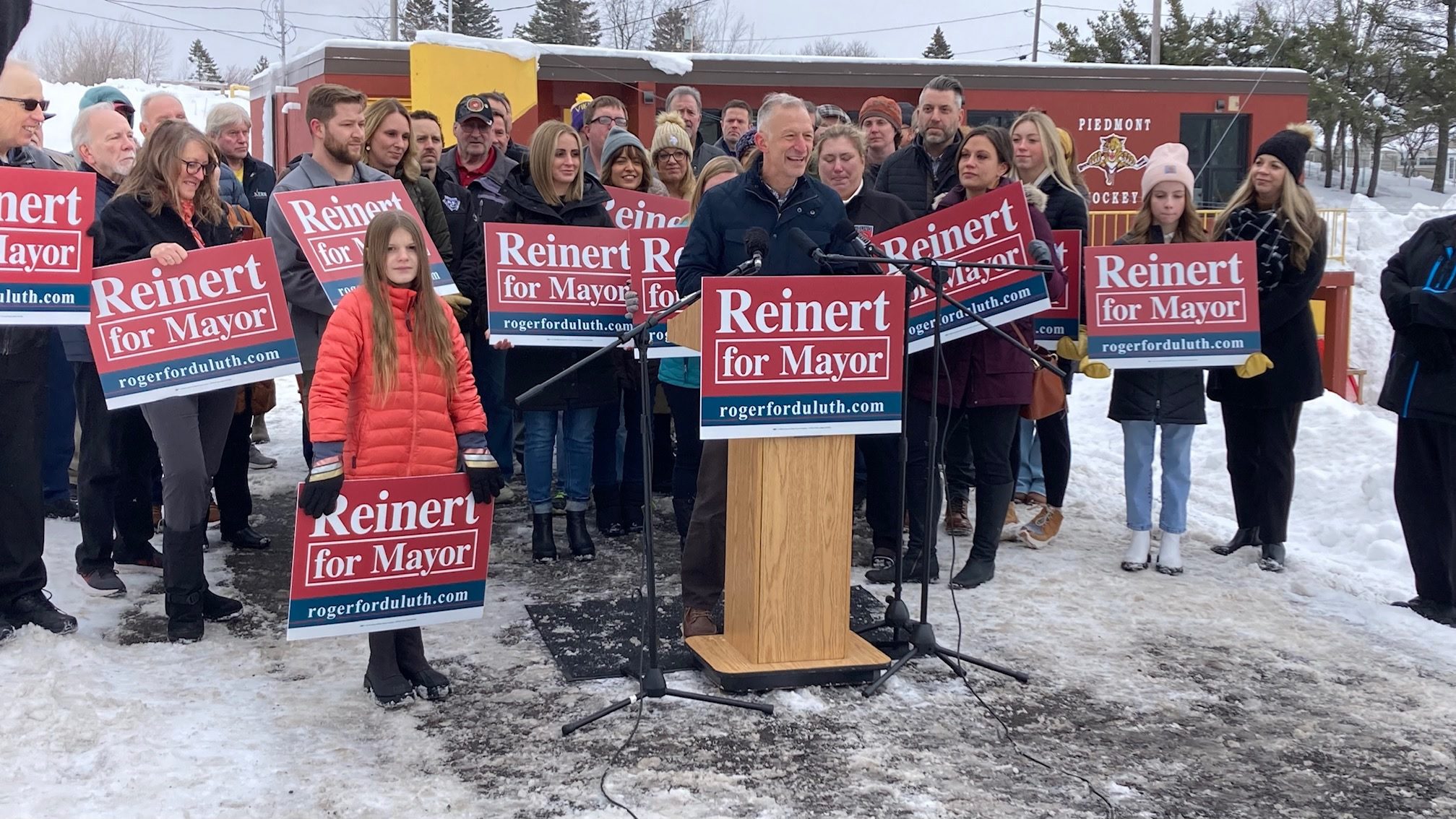 Reinert added that it’s been years since a truly contested election, and that it’s a win for Duluth to have great candidates.

“If it’s a tough choice for voters in November, between well-qualified candidates, that’s really good for our community.”

He pledged to stay away from negative campaign tactics. “I’m going to be critical, and that’s appropriate in any debate over polices. But this will not be a negative campaign. Nor will it ever be personal.”

There is a campaign kick-off event on Friday evening at Warrior Brewing, from 4:30-6:30pm. 2711 W Superior Street in Lincoln Park.

Reinert Announces as Candidate for Mayor of Duluth

Duluth, Mn – With a campaign slogan of, “Expect More – Do Better” Former Duluth City Councilor and State Senator, Roger Reinert, announced today that he will be a candidate in the November 2023, election for the next Mayor of Duluth.

Reinert launched his campaign with over 50 supporters at the Piedmont Heights Community Club in Duuth’s Piedmont Heights neighborhood. “This will be a community effort, so no better place to start than a neighborhood community club”, he said. Reinert also shared that this location was special. “This was the location of my first ever public meeting, in my first ever run for Duluth City Council. It feels very full circle to me.”

In his prepared remarks, Reinert shared three main motivations to run. “Anyone who knows me knows that I love Duluth with a passion, and I am Duluth’s greatest cheerleader. But, our community is facing some serious challenges.” Topping the list Reinert discussed what many Duluthians feel is lack of focus on core city services. “We need city government to do those things that city government must do well – streets, utilities, public safety. Parks and libraries. Tax base development. Housing. If we don’t deliver on effective and efficient core city services – no one else will.”

Reinert also said that the City of Duluth must focus on being a better partner. “Too many residents, community organizations, and businesses find it difficult to deal with City Hall.” He elaborated by saying, “We need city leadership that creates a culture where instead of a default response of, ‘No, try again.’ it’s “Let’s talk about how we can make that happen.’”

When asked why he had decided to run now after six years away from elected service, Reinert said, “Duluth is long overdue for a meaningful conversation about the Duluth we are, and the Duluth we intend to be.” He said that’s what leadership elections like this one for Mayor are intended to be. “We haven’t had a truly contested Mayoral election since 2007. The election in 2019 saw a low 38% voter turnout. “That’s unhealthy for the civic fabric of our community. That’s not Duluth. A difficult choice in November is a win for Duluth, and a win for democracy.”

Reinert also shared that he would be hosting a campaign kickoff event at Warrior Brewing in Duluth’s Lincoln Park neighborhood on January 13th from 4:39-6:30pm. The public is invited to attend. In addition to the opportunity to visit with fellow Duluthians, Reinert said he was eager to highlight Warrior Brewing because of its mission. The brewery was founded by two disabled veterans, and actively seeks opportunities to support other veterans, military, and first responders. “That’s a mission near and dear to my heart,” said Reinert.