For Duluthian Brok Hansmeyer, an evening bike ride on a local trail was once part of his regular routine.

“I would go, you know, several nights a week. After the kids go to bed, after working a long day,” Brok said, “I’d go, you know, near my house up in the Hunter’s Park area.”

Until one day, a turn onto an unfamiliar trail in Mission Creek completely redefined Brok’s routine.

“As I was biking through the woods, I had never been on that trail before, and I came up on a drop,” Brok said, “I went over the handlebars, went directly on my head and broke my neck in two spots, leaving me paralyzed from the chest on down.”

Brok was millimeters away from being a full quadriplegic. What followed was seventeen days in the ICU. 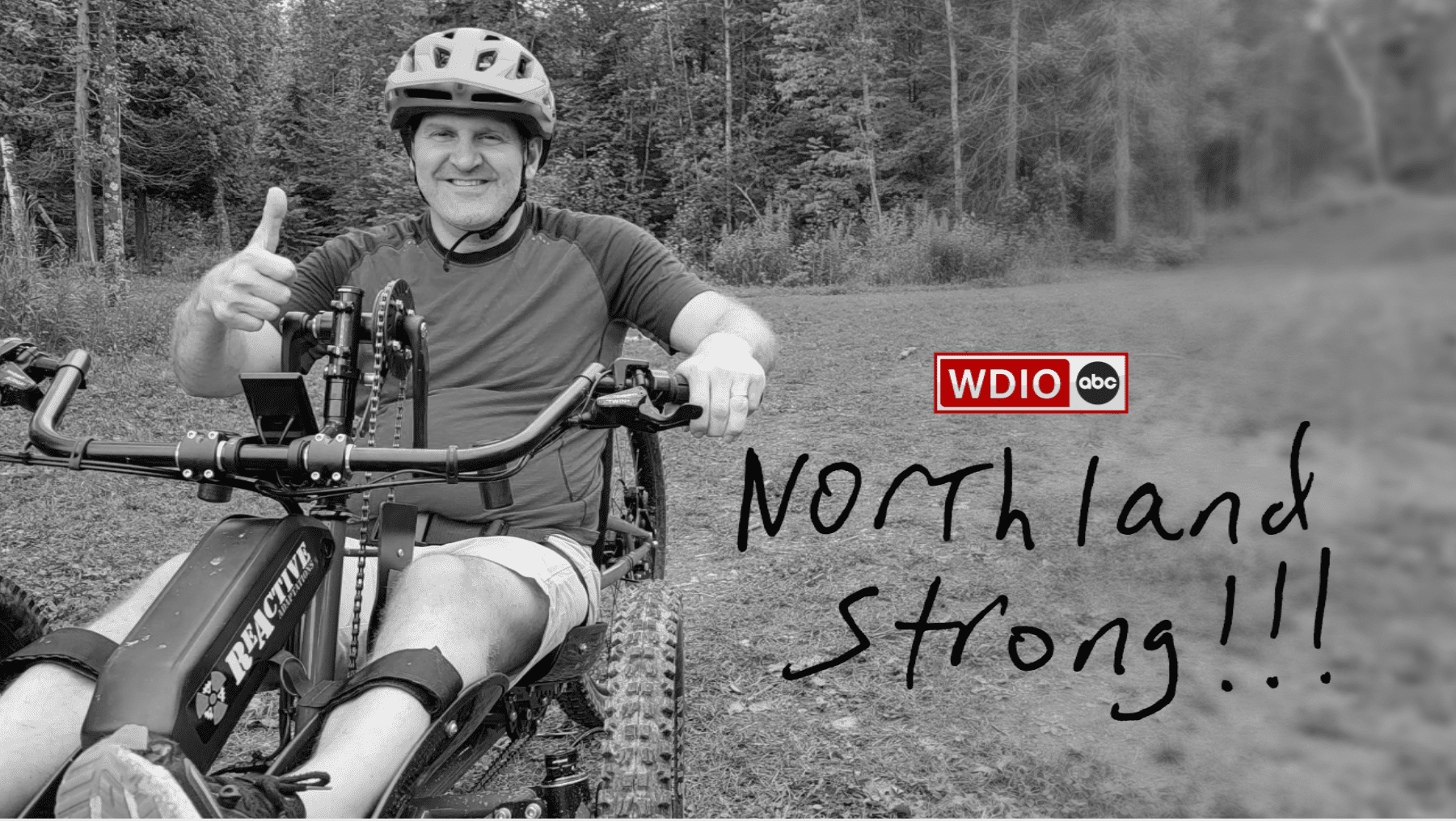 Brok Hansmeyer returns to mountain biking three years after receiving a serious injury on a trail.

Brok said, “At the time, I could not feel or move anything. After my first surgery I had a tiny bit of feeling in my feet, but we’re talking barely. It took about a month for any movement to start coming back and after a long process, you know, different muscle groups would start waking up.”

It’s been three years since his injury. With a cane in each hand, Brok is back on two feet, and getting back on the spokes.

“I’ve done some biking on a trike that I have at home, and it’s like learning to ride a bike again with a new body,” Brok said.

Now, Brok is getting back on a mountain bike for the first time since his injury. A return to the trails is something he’s been thinking about for a long time.

“Probably around that six month mark, I discovered another guy who had been injured twenty-plus years ago and he had biked across America while on a trike with two wheels in the back, one in the front, and he had a team of people helping him out. So it was just a matter of, how can I do this?” Brok said.

That’s where Eric Larson comes in. As the sports and recreation supervisor for Courage Kenny Rehabilitation Institute – Northland, he’s been at the helm of efforts to increase trail accessibility in the Northland over the last several years.

Eric said, “It was a three pronged effort first to identify any barriers to the trail in our region across our system, and then to do the work with the trail clubs to try to widen bridges or to remove pinch points. And then while we were doing that, we were also raising some money to buy a couple of these specialized bikes.”

Courage Kenny now has three adaptive mountain bikes, each one costing nearly $15,000. They brought those bikes to the Bike Duluth Fest so that people like Brok could experience something they might not have been able to on their own.

Eric said, “We have five brand new folks who are either rediscovering the sport after an injury or riding for their first time.”

Eric says the inclusion of adaptive biking in a major festival is a clear sign of the progress being made.

“The general community of outdoor recreation, both users and providers, are starting to say, ‘Yeah, what else can we do? How can we help as well?’ It’s not just an adaptive program doing it, it’s a trail club, it’s a parks department, it’s a school district saying, ‘That’s the right thing. Let’s do our part.’ So I feel a tremendous amount of gratitude for our community making this happen.”

Mountain biking is once again a choice for Brok. He’s able to get out in the woods and enjoy the little things that can easily be taken for granted.

Brok said, “It was exercise to me, but it was also giving me a peace of mind and allowing me to clear my mind as I was biking. So it’s really huge to be able to do it again.”

Others can create the opportunity, but the courage to return to a sport that lead to his injury, that’s something that can only come from Brok.

“I do know since my accent, I’m a lot more cautious in life, not just with myself, but also I got three little kids and sometimes they don’t always know their limits. So I definitely know that I’m more cautious than I was before, but yeah,” Brok said, “I’m looking forward to getting out on the trails again.”