UMD doubles down in OT, clinching 1st trip to NCAA title game since 2010 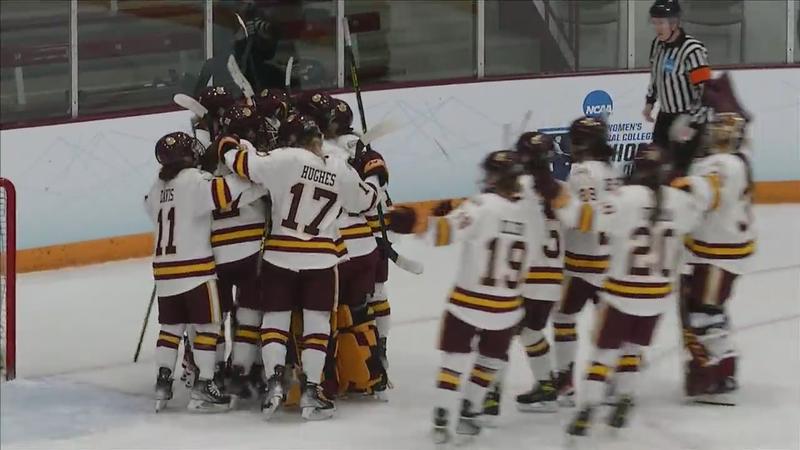 Northeastern University took away their chance last season winning 3-2. Then on Friday evening the Bulldogs would secure Frozen Four revenge over the Huskies at Pegula Ice Arena in University Park, Pennsylvania advancing to face Ohio State University for the title.

"We put in so much work in the offseason and our goal from the start, when we all got together as a group, was to make it to that game. For it to come true with this group of girls ,it’s just so incredibly special," senior forward Naomi Rogge said during a post-game press conference.

The first period in the semifinal would set the stage for what would be a fight between the pipes. Olympian, and brick wall, Emma Soderberg would backstop UMD with 46 saves to the Huskies’, and Women’s Goalie of the Year finalist, Aerin Frankel’s 48 saves.

"It was an exciting game, you’re just in it the whole time. I thought we played a really good defense today, kind of keeping them to the outside as much as we can." Senior goalie Soderberg added, "this is the type of hockey you want to play."

Northeastern’s Skylar Irving broke the ice first in the second period to take the 1-0 lead. Halfway through the third period Taylor Anderson would tie it up 1-1 to keep UMD in the game.

"She’s a Frozen Four killer," head coach Maura Crowell said. "She had a big goal last year for us against these guys, and that’s where your depth comes through and it showed tonight."

Regulation would end knotted at ones, and so would the first overtime. Then double overtime looked like it too would end scoreless, until with under two minutes to go East Coast graduate transfer Elizabeth Giguere sends a pass up to Naomi Rogge who ends it all with a shot to the back of the net for the Bulldogs.

"I was just trying to go hard on the net and I called for it she gave it to me and I just tried to get it off as quick as I could," Rogge recalled.

"This is probably the best moment I’ve ever had in my career," Crowell shared.

Puck drop against the Buckeyes, who beat Yale 2-1 to advance, is set for 3pm CT Sunday at Pegula Ice Arena.