According to the Center of Disease Control (CDC) around 2 million high school athletes report injuries each year. Duluth East’s Rachel Hagen accounts for two of those, but the Greyhound is much more than a statistic. A basketball standup, her resilience and dedication to return to the court after multiple surgeries makes her one in a million.

Finding true love can sometimes mean taking a shot in the dark. For Duluth East’s Rachel Hagen it was taking a shot from the baseline back in first grade on her mom’s basketball team.

Now a junior in high school, the sport has been with her through good times and in bad, through sickness and in health" I always have had basketball, when I’m sad I go shoot," Hagen explained. "Being able to not really do that, especially the first couple first months, was really hard because I didn’t have that outlet."

It was the 2018-2019 season when then-eighth grader Rachel would first feel her world crumble beneath her feet."I was coming down for a rebound and just felt off," Hagen recalled. "I heard a pop and it felt weird, so I ran back down the court and then I told my coach, ‘I don’t think I can do this." She talked to her trainer and two weeks later, still in pain, got an MRI that came back with bad news; the ACL in her left knee had torn.

"I had no idea what was in store for me, honestly."

Rachel soon learned it meant 9-12 months of recovery, the ACL tearing her away from her passion for almost a whole year. However, young and athletic she bounced back quickly. Hagen played Junior Varsity (JV) and Varsity basketball at Duluth East her whole freshman year, and then AAU basketball into the summer, until the sun set on the season in August bringing darkness once again. 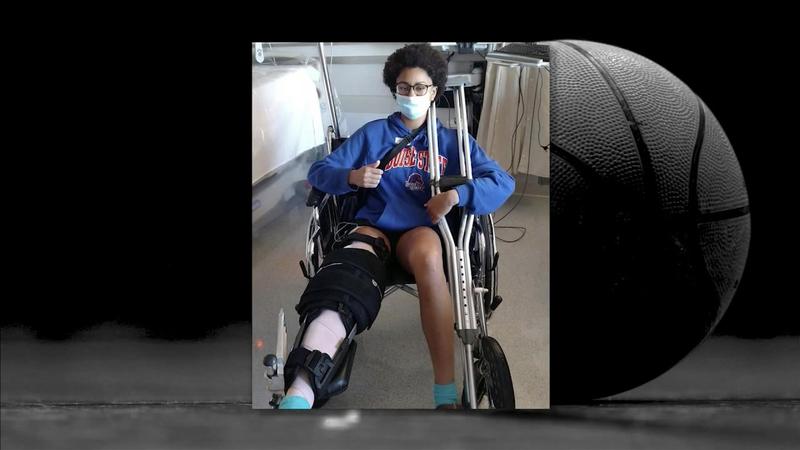 "It was probably one of the second to last summer league games against Esko, during Covid too, so my parents were not there," Hagen recalled. "I was going for a lay-up, my body went one way, I got pushed, my body went one way, my leg went the other way. I was crying, my coach was like, well what’s wrong? I said, ‘I tore my ACL’. I knew it, I knew I didn’t need an MRI to tell me that."

That was her second ACL tear with the injury this time in the right knee, meaning a second basketball season was lost for the now incoming sophomore.

"We have our talks, we laugh. We cried a lot, I mean we were mad, crying. I was just angry, especially the second time," Rachel’s mom LeVearne said.

It would be tough for everyone involved, especially Rachel, "seeing everybody else being able to play it hurts."

The pain struck deeper than the young athlete’s ligament, as the mental recovery process would prove to be a longer, more challenging road than the physical one.

"I honestly didn’t know if she was even just going to quit basketball in general," CJ Osuchukwu said, one of Rachel’s AAU basketball coaches.

Following the second ACL tear Rachel would call off her hoops career.

"We just sat back and let her come to her own decision whether she wanted to play or not," LeVearne shared. "Then a month later, she’s like, ‘Mom I got this, I’m going to play again.’"

A fighter at heart she took the ball back into her own court. Armed with a ballpoint pen and a notebook gifted from friends the fight started again in the form of journaling, with the first entry being penned on Sept. 2, 2020.

For 177 days her pain level, sleep rate, and mental state was recorded, along with a goal: return to AAU Starks Academy Elite summer ball. So because she couldn’t practice, the focus turned to setting herself apart off the court working on basketball IQ, watching film, and going to physical therapy at Viverant in Duluth.

"As months progressed I was able to walk, then I was able to jump and jog, and I think my biggest win was when I got to be able to go on the treadmill for the first time."

Phil DesMarais worked with Rachel during her time at Viverant as her strength and performance coach. "She’s four, four or five months post-op and she’s already being able to run and jump," DesMarais recalled. "Having to pull her back a little bit and be like, ‘okay we still need to slow it down’, but then kind of turning on the gas when she needed to, that’s kind of what set her apart."

Out of a jersey sometimes the process felt lonely, but never for long with friends, teammates, and coaches offering support daily.

“I think some of that stress that we put on the kids that they feel like, I don’t want to let them down? You kind of force them to do different things and their bodies will break down,” Dyami Starks said, one of Rachel’s AAU coaches. “I said, it’s totally normal for you to just say, you know what? I don’t even know if I want to do this, because when you do come back, that’s 100% your choice.

“I think the game is 85-90% mental,” Osuchukwu said. “So just checking in on them, especially in this generation where there’s so much social media. You see people doing this, you see people doing that, sometimes I think we can idolize people and just making sure they’re mentally locked in,” he added is important for young athletes.

“Every individual has their own story with it,” DesMarais said regarding injuries. “But it’s helpful to kind of hear it from somebody else and then have your own story.”

“Having a buddy to go along with me was extremely helpful because we worked out together during practice. We kind of studied together, we did literally everything together.”

Now in her junior year Rachel is offering her own support to Northland basketball players.

“There’s a girl in I-Falls [International Falls] Olivia Thostensen who just tore hers. I think it was the first time, too,” Starks explained. “The first person I said to reach out to [was] Rachel, I said she’s been through it twice.”

The advice Rachel has is to stay strong, “push yourself to get there, and I don’t think you’ll regret it.”

“It’s definitely a life lesson,” Rachel’s dad Jay Hagen said. “Perseverance pays off. This won’t be the hardest thing that you’ll have to get through in your life but it’s up there.”

Then on May 18th, 2021 Rachel would pen the final entry in her journal. It read, “I played my first AAU tournament since my injury, on May 18th. Super proud of how far I’ve come from my surgery in September.” It goes on to read, “I feel great. I do have tendonitis and calf pain, I do get dry needling to help, but I’m super excited for what’s next."

Healthy again, Hagen notched a full junior season in 2021-2022 with the Duluth East girls varsity basketball team, finishing second on the team in points averaging over 15 a game to close out another chapter in the young athlete’s fantastic journey of resilience.