Tis the season for Maple Syrup

It’s that time of the season, time to start tapping those trees for maple syrup! Warm weather is good news for tapping maple trees. “When we see some consistent weather in that forty degrees and sunny skies, that tends to make the sap move more than cloudy, dreary days,” says Farmer Doug. To get a nice flow of sap down the taps, it has to freeze at night.

Farmer Doug and others will be tapping around 900 trees during the season.

When it comes to collecting syrup, different methods can be used. For Farmer Doug and some tappers, they stick to one style. “We use primary the bag system and the little 5/16 metal tap. The larger the hole you drill, the longer it takes the tree to heal and the greater chance for any disease to get in.” This method is going to cost about five dollars a setup.

Another way that is a bit more cost-efficient versus the ‘bag system’, is using a lightweight tube and a minimum of a 5-gallon bucket. "Staying with a 5/16 tap is this plastic with a liter tube that you can run from a tree down to a bucket of a sort. This is a more economic system,” said Farmer Doug. This setup is going to cost about fifty cents a setup.

When it comes to tapping the trees, keeping them in overall good health during and after the season is a big concern for some. "Over taping is a big problem; you can impact the health of the tree. We put in a tree that is 10in, we put in only one tap, says Farmer Doug. If it is a 20 inches tree, I will put in two taps and that’s enough. I have seen some research that more taps do not mean more sap.”

The maple syrup sap season usually runs from about March 15 to April 20. 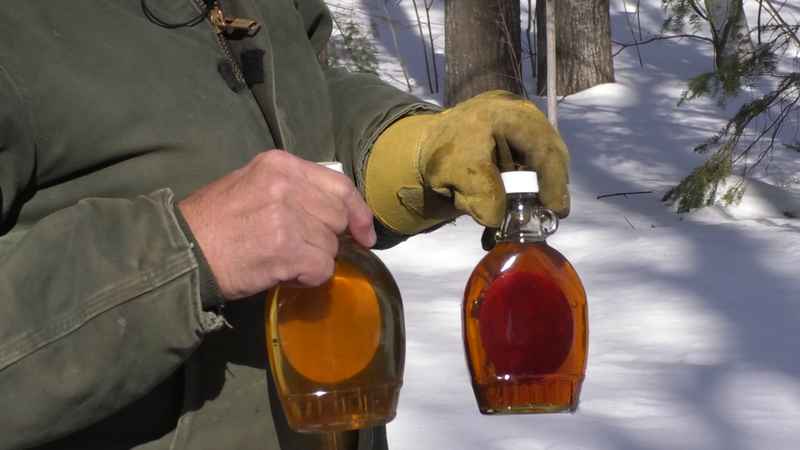