Several people gathered in a parking lot in Side Lake on Thursday, awaiting the arrival of a tractor.

“My brother in law who lives here, he and I had talked about he wanted my tractor and we would laugh about it, and I said, ‘Oh, yeah, I’ll drive it back there’,” said Driver Mike Adkinson. “And that went on for two or three years, and so then I thought, you know what I could do? I am 76. I need a challenge.”

Challenge accepted, Adkinson decided to drive the tractor from his home in Bellingham, Washington to Side Lake, Minnesota.

“We have family here. We have history here,” said his wife Phyllis.My brother in law and my sister actually live up the road on Perch Lake, and that’s the tractor’s new home.”

Adkinson spent over five weeks making the trek from Washington to Minnesota, and it’s for a good cause. 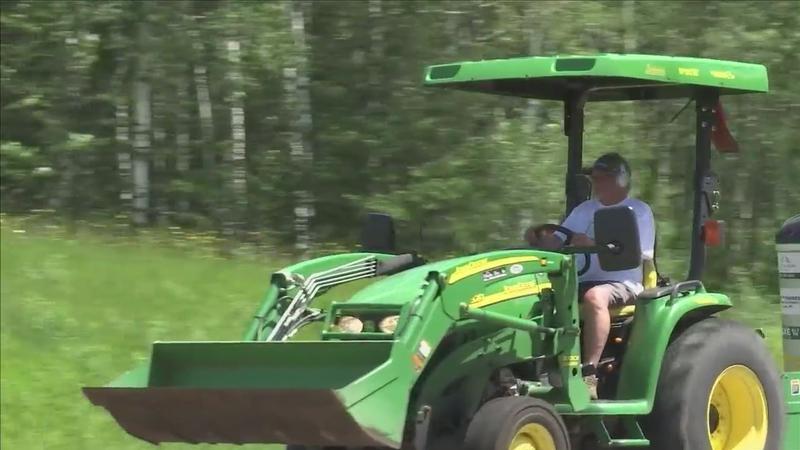 “I thought, ‘Well, I’m going to do this’. Well, then about that time, my brother got Parkinson’s, and then I thought, ‘Well, shoot, I think I can raise money doing this. For the American Parkinson’s Disease Association,” said Mike. “And thus, the idea was hatched.”

“Very quickly, there have been a lot of changes in his ability to move around and to process information,” said Phyllis. “It’s pretty frightening.”

To help people like his brother in law, Adkinson used his 1700-mile tractor drive to raise money for the American Parkinson’s Disease Association.

“We didn’t realize how prevalent Parkinson’s is, and so we’ve learned a lot about it.” said Phyllis. “We’ve learned from people along the way about it. And yeah, the donations came in and we met our goal of 50,000, which was amazing.”

For Mike, the people he met along the way made the journey worthwhile.

If you would like to donate to the cause, go to this link.