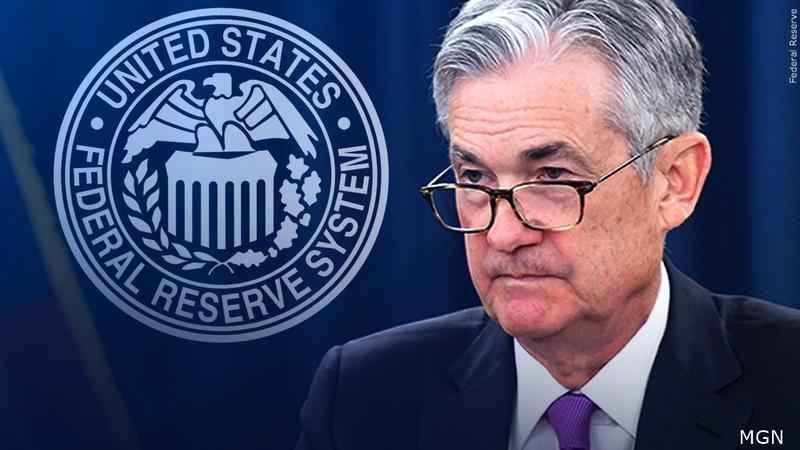 WASHINGTON (AP) — On Wednesday, the Federal Reserve intensified its fight against the worst inflation in 40 years by raising its benchmark interest rate by a half-percentage point — its most aggressive move since 2000 — and signaling further large rate hikes to come.

The increase in the Fed’s key short-term rate raised it to a range of 0.75% to 1%, the highest point since the pandemic struck two years ago.

The Fed also announced that it will start reducing its huge $9 trillion balance sheet, made up mainly of Treasury and mortgage bonds. Reducing those holdings will have the effect of further raising loan costs throughout the economy.

With prices for food, energy and consumer goods accelerating, the Fed’s goal is to cool spending — and economic growth — by making it more expensive for individuals and businesses to borrow. The central bank hopes that higher costs for mortgages, credit cards and auto loans will slow spending enough to tame inflation yet not so much as to cause a recession.

It will be a delicate balancing act. The Fed has endured widespread criticism that it was too slow to start tightening credit, and many economists are skeptical that it can avoid causing a recession.

Speaking at a news conference Wednesday, Chair Jerome Powell made clear that further large rate hikes are coming. He said that additional half-point increases in the Fed’s key rate “should be on the table in the next couple of meetings” in June and July.

But Powell also sought to downplay any speculation that the Fed might be considering a rate hike as high as three-quarters of a percentage point.

“A 75-basis-point hike is not something that the committee is actively considering,” he said — a remark that appeared to cause stock indexes to jump. Before he spoke, the Dow Jones Industrial Average had risen modestly. Less than an hour later, the Dow was up 700-plus points.

At his news conference, Powell stressed his belief that “restoring price stability” — that is, curbing high inflation — is essential to sustaining the economy’s health.

In their statement Wednesday, the central bank’s policymakers noted that Russia’s invasion of Ukraine is worsening inflation pressures by raising oil and food prices. It added that “COVID-related lockdowns in China are likely to exacerbate supply chain disruptions,” which could further boost inflation.

Inflation, according to the Fed’s preferred gauge, reached 6.6% last month, the highest point in four decades. Inflation has been accelerated by a combination of robust consumer spending, chronic supply bottlenecks and sharply higher gas and food prices, exacerbated by Russia’s war against Ukraine.

Starting June 1, the Fed said it would allow up to $48 billion in bonds to mature without replacing them, a pace that would reach $95 billion by September. At September’s pace, its balance sheet would shrink by about $1 trillion a year. The balance sheet more than doubled after the pandemic recession hit as the Fed bought trillions in bonds to try to hold down long-term borrowing rates.

Powell has said he wants to quickly raise the Fed’s rate to a level that neither stimulates nor restrains economic growth. Fed officials have suggested that they will reach that point, which the Fed says is about 2.4%, by year’s end.

Some economists warn that some of the factors fueling inflation — notably, shortages of supplies and workers — are outside the Fed’s ability to solve.

The Fed’s credit tightening is already having some effect on the economy. Sales of existing homes sank 2.7% from February to March, reflecting a surge in mortgage rates related, in part, to the Fed’s planned rate hikes. The average rate on a 30-year mortgage has jumped 2 percentage points just since the start of the year, to 5.1%.

Yet by most measures, the overall economy remains healthy. This is especially true of the U.S. job market: Hiring is strong, layoffs are few, unemployment is near a five-decade low and the number of job openings has reached a record high.

Powell has pointed to the widespread availability of jobs as evidence that the labor market is tight – “to an unhealthy level” that would tend to fuel inflation. The Fed char is betting that higher rates can reduce those openings, which would presumably slow wage increases and ease inflationary pressures, without triggering mass layoffs.

For now, with hiring robust — the economy has added at least 400,000 jobs for 11 straight months — and employers grappling with labor shortages, wages are rising at a roughly 5% annual pace. Those pay raises are driving steady consumer spending despite spiking prices. In March, consumers increased their spending 0.2% even after adjusting for inflation.

Even if the Fed’s benchmark rate were to go as high as 2.5% by year’s end, Powell said last month, the policymakers may still tighten credit further — to a level that would restrain growth — “if that turns out to be appropriate.”

Financial markets are pricing in a rate as high as 3.6% by mid-2023, which would be the highest in 15 years. Shrinking the Fed’s balance sheet will add another layer of uncertainty surrounding how much the Fed’s actions may weaken the economy.

Complicating the Fed’s task is a slowdown in global growth. COVID-19 lockdowns in China are threatening to cause a recession in the world’s second-largest economy. And the European Union is facing higher energy prices and supply chain disruptions after Russia’s invasion of Ukraine.

What’s more, other central banks around the world are also raising rates, a trend that could further imperil global growth. On Thursday, the Bank of England is expected to raise its key rate for the fourth straight time. The Reserve Bank of Australia increased its rate Tuesday for the first time in 11 years.

And the European Central Bank, which is grappling with slower growth than in the United States or the United Kingdom, may raise rates in July, economists expect.

WASHINGTON (AP) — The Federal Reserve is poised this week to accelerate its most drastic steps in three decades to attack inflation by making it costlier to borrow — for a car, a home, a business deal, a credit card purchase — all of which will compound Americans’ financial strains and likely weaken the economy.

Yet with inflation having surged to a 40-year high, the Fed has come under extraordinary pressure to act aggressively to slow spending and curb the price spikes that are bedeviling households and companies.

After its latest rate-setting meeting ends Wednesday, the Fed will almost certainly announce that it’s raising its benchmark short-term interest rate by a half-percentage point — the sharpest rate hike since 2000. The Fed will likely carry out another half-point rate hike at its next meeting in June and possibly at the next one after that, in July. Economists foresee still further rate hikes in the months to follow.

What’s more, the Fed is also expected to announce Wednesday that it will begin quickly shrinking its vast stockpile of Treasury and mortgage bonds beginning in June — a move that will have the effect of further tightening credit.

Chair Jerome Powell and the Fed will take these steps largely in the dark. No one knows just how high the central bank’s short-term rate must go to slow the economy and restrain inflation. Nor do the officials know how much they can reduce the Fed’s unprecedented $9 trillion balance sheet before they risk destabilizing financial markets.

“I liken it to driving in reverse while using the rear-view mirror," said Diane Swonk, chief economist at the consulting firm Grant Thornton. “They just don’t know what obstacles they’re going to hit.”

Yet many economists think the Fed is already acting too late. Even as inflation has soared, the Fed’s benchmark rate is in a range of just 0.25% to 0.5%, a level low enough to stimulate growth. Adjusted for inflation, the Fed’s key rate — which influences many consumer and business loans — is deep in negative territory.

That’s why Powell and other Fed officials have said in recent weeks that they want to raise rates “expeditiously,” to a level that neither boosts nor restrains the economy — what economists refer to as the “neutral” rate. Policymakers consider a neutral rate to be roughly 2.4%. But no one is certain what the neutral rate is at any particular time, especially in an economy that is evolving quickly.

If, as most economists expect, the Fed this year carries out three half-point rate hikes and then follows with three quarter-point hikes, its rate would reach roughly neutral by year’s end. Those increases would amount to the fastest pace of rate hikes since 1989, noted Roberto Perli, an economist at Piper Sandler.

Powell said last week that once the Fed reaches its neutral rate, it may then tighten credit even further — to a level that would restrain growth — “if that turns out to be appropriate.” Financial markets are pricing in a rate as high as 3.6% by mid-2023, which would be the highest in 15 years.

Expectations for the Fed’s path have become clearer over just the past few months as inflation has intensified. That’s a sharp shift from just a few month ago: After the Fed met in January, Powell said, "It is not possible to predict with much confidence exactly what path for our policy rate is going to prove appropriate.”

Jon Steinsson, an economics professor at the University of California, Berkeley, thinks the Fed should provide more formal guidance, given how fast the economy is changing in the aftermath of the pandemic recession and Russia’s war against Ukraine, which has exacerbated supply shortages across the world. The Fed’s most recent formal forecast, in March, had projected seven quarter-point rate hikes this year — a pace that is already hopelessly out of date.

Steinsson, who in early January had called for a quarter-point increase at every meeting this year, said last week, “It is appropriate to do things fast to send the signal that a pretty significant amount of tightening is needed.”

One challenge the Fed faces is that the neutral rate is even more uncertain now than usual. When the Fed’s key rate reached 2.25% to 2.5% in 2018, it triggered a drop-off in home sales and financial markets fell. The Powell Fed responded by doing a U-turn: It cut rates three times in 2019. That experience suggested that the neutral rate might be lower than the Fed thinks.

But given how much prices have since spiked, thereby reducing inflation-adjusted interest rates, whatever Fed rate would actually slow growth might be far above 2.4%.

Shrinking the Fed’s balance sheet adds another uncertainty. That is particularly true given that the Fed is expected to let $95 billion of securities roll off each month as they mature. That’s nearly double the $50 billion pace it maintained before the pandemic, the last time it reduced its bond holdings.

Brett Ryan, an economist at Deutsche Bank, said the balance-sheet reduction will be roughly equivalent to three quarter-point increases through next year. When added to the expected rate hikes, that would translate into about 4 percentage points of tightening through 2023. Such a dramatic step-up in borrowing costs would send the economy into recession by late next year, Deutsche Bank forecasts.

Yet Powell is counting on the robust job market and solid consumer spending to spare the U.S. such a fate. Though the economy shrank in the January-March quarter by a 1.4% annual rate, businesses and consumers increased their spending at a solid pace.

If sustained, that spending could keep the economy expanding in the coming months and perhaps beyond.