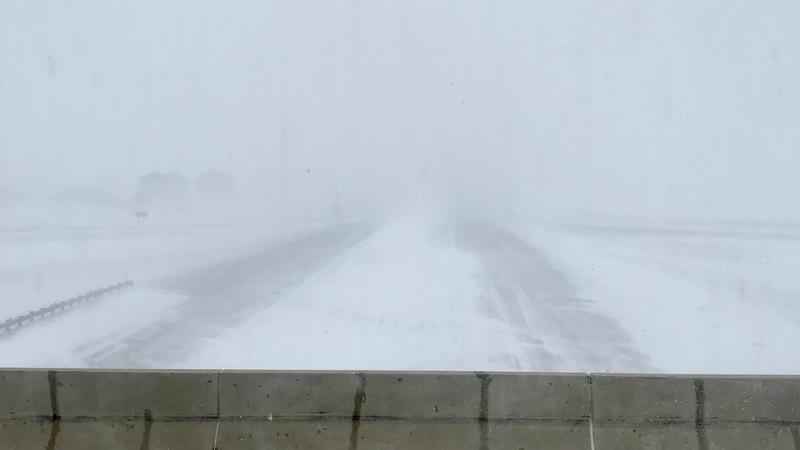 The North Dakota Department of Transportation posted this photo of I-94 in Bismarck, as seen from a bridge Tuesday.[ND DOT]

BISMARCK, N.D. (AP) — A tornado tore up a small Minnesota town and a blizzard forced the closure of the North Dakota Capitol, schools and roads, as spring storms wreaked havoc across the Upper Midwest.

The National Weather Service said the twister with winds of more than 110 mph took the roofs off houses, destroyed grain bins, snapped power lines and lifted a house off its foundation in Taopi, Minnesota late Tuesday.

Two people were pulled from the wreckage and taken to a hospital in nearby Austin with noncritical injuries after the fierce winds roared through the town of about 80 residents just after 10:30 p.m.

The North Dakota Capitol in Bismarck, along with scores of schools, government offices and roads, remained closed Wednesday as a blizzard continued to bear down on the state.

A blizzard warning remained in effect through Thursday. Up to 2 feet (60 centimeters) of snow was forecast for western and central North Dakota. The blizzard warning extended into eastern Montana and the northwestern corner of South Dakota.

"This is nutso," Karley Gosch said as she braved the strong winds and pelting snow in Mandan, North Dakota.

Interstate 94 from the Montana border to Bismarck remained closed because of treacherous conditions.

Bismarck and Mandan public schools were closed Wednesday, along with numerous colleges and universities.