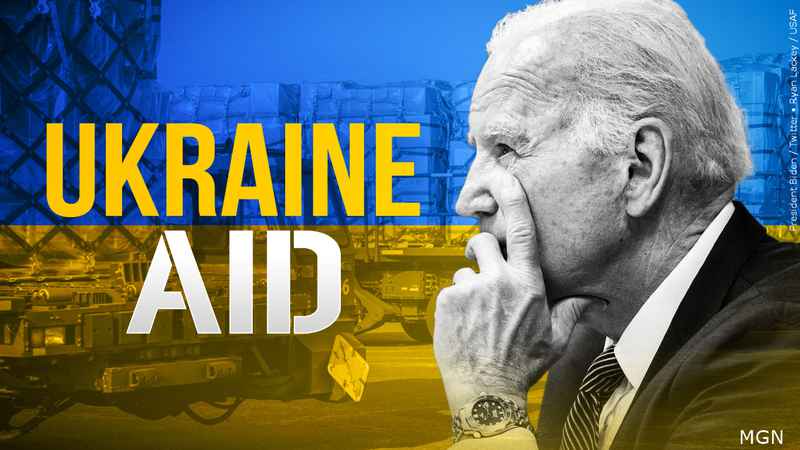 WASHINGTON (AP) — President Joe Biden on Thursday announced an additional $800 million in military aid to help Ukraine fight back in its strong but increasingly difficult battle against the Russian invasion, but he also warned that Congress will need to approve even more assistance if the U.S. is to keep up its crucial support.

The new military package includes much needed heavy artillery, 144,000 rounds of ammunition and drones for the escalating battle in the Donbas region of eastern Ukraine. It builds on roughly $2.6 billion in military assistance that Biden had previously approved.

The aid, Biden said, will be sent "directly to the front lines of freedom."

"Putin is banking on us losing interest," Biden said. The Russian president is betting that "Western unity will crack … and once again we’re going to prove him wrong."

Biden underscored the need for the United States and Western allies to remain resolved in their support for Ukraine amid signs that Americans may becoming more wary of the war.

A poll published Thursday by The Associated Press-NORC Center for Public Affairs Research shows Americans’ desire to get involved has waned somewhat. Some 32% say the U.S. should have a major role in the conflict. That’s ticked down from 40% last month, though it’s slightly higher than the 26% who said so in February. An additional 49% say the U.S. should have a minor role.

Biden also announced that all Russian-affiliated ships would be barred from U.S. ports.

And he said the United States would provide an additional $500 million in direct economic assistance to the Ukrainian government. That raises the total U.S. economic support to $1 billion since Russia’s invasion began nearly two months ago.

Biden said that $6.5 billion in security assistance that Congress approved last month as part of a $13.6 billion package for Ukraine could soon be "exhausted." With the latest military aid announced Thursday, Biden has approved about $3.4 billion in military aid since Feb. 24. Congress’ overall total also included about $6.8 billion in direct economic assistance to care for refugees and provide economic aid to allies in the region impacted by the war — and additional funding for federal agencies to enforce economic sanctions against Russia and protect against cyber threats.

"Next week, I’m going to have to be sending to Congress a supplemental budget request to keep weapons and ammunition deployed without interruption," Biden said.

Congress has signaled it is receptive to further requests and has been expecting there would be a need for further help for the Ukrainians. But the issue could become entwined with partisan fights over pandemic spending and immigration, complicating the pathway.

Senate Minority Leader Mitch McConnell, R-Ky., has expressed a willingness to consider more aid for Ukraine in recent weeks. "I think we need to say we want the Ukrainians to win, and we’re prepared to do everything we can to help them win," McConnell said Monday in Shelbyville, Kentucky.

"We want to do more," House Speaker Nancy Pelosi, D-Calif., told reporters at the Capitol, during an appearance with Ukrainian Prime Minister Denys Shmyhal. She said lawmakers would learn more about Biden’s latest funding request "in the next day or so, to be taken up as soon as we can. Next week."

Biden did not detail how much additional funding he would request, adding that he was consulting with defense officials.

Biden spoke on the new assistance, and more broadly about the situation in Ukraine, hours after Russian President Vladimir Putin claimed victory in the strategic city of Mariupol. Putin, however, ordered his troops not to risk more losses by storming the last pocket of Ukrainian resistance in the war’s iconic battleground.

Biden in an exchange with reporters following his remarks called Russia’s claim on Mariupol "questionable."

Russian forces have destroyed much of southeastern port city, which has witnessed some of the fiercest fighting of the war. By Russian estimates, about 2,000 Ukrainian forces remain holed up in a sprawling steel plant, even as Russian forces continue to pound the industrial site and repeatedly issue ultimatums for Ukrainian forces’ surrender.

The new U.S. military assistance is expected to include 72 155mm howitzers, 144,000 artillery rounds, 72 vehicles used to tow to the howitzers onto battlefields, and over 121 Phoenix Ghost tactical drones, as well as field equipment and spare parts.

Pentagon press secretary John Kirby said the drones were developed by the Air Force in specific response to Ukrainian needs and produced by a U.S. company, Aevex Aerospace, but he would not say whether the program began before Russia started its invasion Feb. 24. Kirby said the Phoenix Ghost is similar to the armed Switchblade kamikaze drones that the Pentagon already is providing to Ukraine.

The 72 howitzers are in addition to the 18 announced last week the U.S. was transferring to Ukraine.

Biden’s decision to quadruple the number pledged in an arms package announced just last week reflects what is shaping up as a major ground battle in the contested Donbas region of eastern Ukraine.

The Russians have been deploying additional artillery there in recent days as they aim to expand their offensive and attempt to take full control of the Donbas after retreating from a failed attempt to capture Kyiv, the capital. Heavy weaponry like artillery is expected to play a key role in the fighting in the relatively confined Donbas area where Ukrainian and Russian-backed separatists have been battling since 2014.

A senior U.S. defense official said training of Ukrainian personnel on American 155mm howitzers has begun in a European country outside Ukraine.

The announcements on new aid came against the backdrop of International Monetary Fund and World Bank spring meetings this week dominated by conversations over how to manage the spillover from Russia’s war in Ukraine.

Ahead of his remarks, Biden met with Ukrainian Prime Minister Shmyhal. The Ukrainian leader also met on Thursday with Treasury Secretary Janet Yellen as well as Pelosi.

Kristalina Georgieva, the International Monetary Fund’s managing director, said at a news conference on Wednesday that Ukraine’s financial ministry officials have estimated they will need $5 billion in international assistance per month for the coming months to help cover essential government services and keep the country’s economy going.

Yellen at a news conference after meeting with Shmyhal said the economic aid the U.S. and allies have sent "is only the beginning of what Ukraine will need to rebuild." She added that she’d be discussing efforts to further aid Ukraine with her Western counterparts this week.

"I think we stand united in recognizing we’ve got to find ways to meet Ukraine’s needs," Yellen said.

The Biden administration also announced a new program Thursday aimed at streamlining refugee applications for Ukrainians and others fleeing the fighting, while they are still in Europe. The U.S. will no longer routinely grant entry to those who show up at the U.S.-Mexico border seeking asylum, as thousands have.