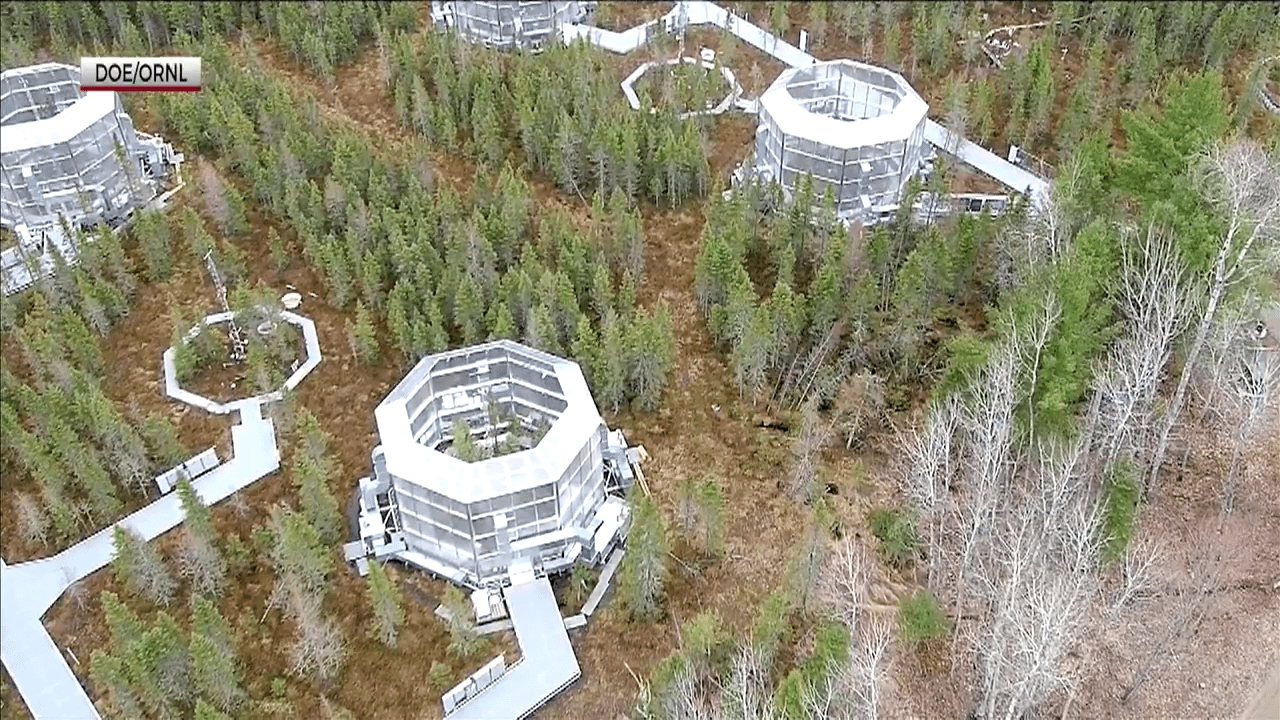 Hidden in a forest north of Grand Rapids is a multi-million dollar research project that has global implications. This story first aired on November 11, 2019.

The study funded by the U.S. Department of Energy is exploring the impacts of rising temperatures on wetlands. The Marcell Experimental Forest is the perfect location for the project because of the role the forest’s lands play in maintaining the balance of greenhouse gases.

Kolka said, “These peatland ecosystems globally occupy only 3% of the planet, but they have 30% of the soil carbon.”

The Experimental Forest is home to 10 open greenhouses that control carbon dioxide levels, ground temperature, and air temperature. Each greenhouse represents a different climate. The most extreme chamber is 16 degrees warmer than the actual temperature.

Local scientists aren’t focused on the controversy that surrounds climate change. They want to know the impact rising temperatures would have on trees, plants, and other vegetation.

“We wanted to push the ecosystems at some higher temperatures just to see what would happen maybe in future years past 2100, or if things happen more quickly than we anticipate,” Kolka said.

The project began in 2015. Over the next decade, the Department of Energy will take what they learn about how these ecosystems respond to warming temperatures and apply that information to climate forecasting models. Just a few years in, the results are more dramatic than expected.

Kolka said, “I think we’re seeing things that we didn’t anticipate to see for years to come yet.” Kolka said the trees in the warmest environment are slowly dying due to the number of “false springs” they experience.

“You add 16 degrees to that 30 degree day in March, they think it’s spring already and they’re starting to put out needles and roots and things like that,” Kolka said, “But then we can also get another cold snap, and they get frost bitten and drop their needles and have to start over again when it gets warmer.”

While it happened sooner than anticipated, Kolka expected the trees to suffer. However, he’s surprised by how much other plants are thriving.

“The shrubs are reacting very positively,” Kolka said. He explained that the shrubs aren’t damaged by the false springs in the same way the trees are, and he doesn’t quite understand why at this point.

The problem with this is that the shrubs are edging mosses out of the picture. Mosses play a key role in maintaining carbon levels. “It’s the smallest plan that leads to the most carbon. It’s the most productive plant in here,” Kolka said.

The intake and outtake of greenhouse gases is being thrown off balance. “The carbon accumulation mechanism of the moss is taken off the table,” Kolka said, “The plant community ability to cleanse the atmosphere of carbon dioxide is taken away. …We get more CO2 and methane coming out, that exacerbates climate change, and that affects the plant communities even more.”

As shrubs replace native trees in this most extreme scenario, it represents an entirely different Minnesota forest than we know today.

Dr. Kolka said the chamber set to 4 degrees warmer than the outside temperature is the closest to what scientists think the environment of 2100 will be like. So far, this chamber represents subtle changes. But as the experiment continues, Kolka expects the +4 chamber to further align with the changes reflected in the +16 chamber.

Kolka says warming temperatures could change the forests as we know them, which would further throw off the carbon balance, and affect the entire planet.

“I think the average person should really be aware of what’s going on here as far as the implications that it’s going to have for predicting our future climate,” Kolka said.