Native Wise, a native-owned and operated business in Sawyer, MN, now has twelve buffalo on their 380-acre farm.

“It’s amazing. Every morning, I wake up, and I come out here, and I just pinch myself,” said co-owner David Wise. “I’ve just had a passion for bison my whole life. I’ve always just thought they were amazing animals.”

The buffalo were rounded up from one of The Nature Conservancy’s preserves in Nebraska.

“The Nature Conservancy has managed bison herds across our preserve, the land that we own in bison range in North America, for quite a while,” said Resilience Forestry Manager Chris Dunham. “That management has really been centered around the importance of bison to the ecology landscape.”

Wise aspires to let the buffalo utilize his land and bring back native plant diversity.

“All these fields are not as diverse as they could be. They’re not as productive as they could be,” said Wise. “And when you have animals on that land, especially buffalo, they promote native plants that come out? And, you know, you know, I think it’ll be a good thing. It’ll be sustainable for many generations.” 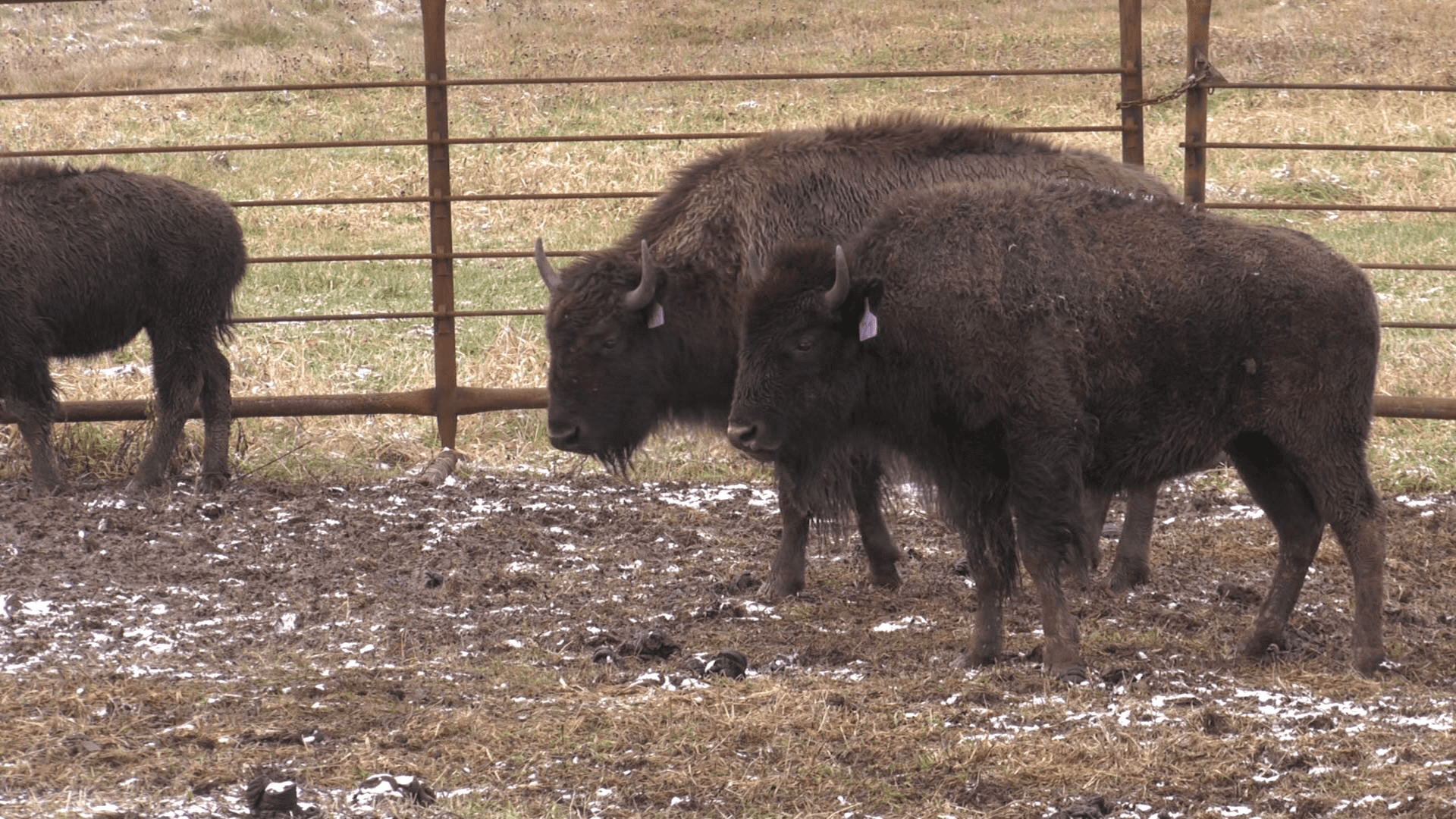 A dozen buffalo now reside within the reservation boundaries of the Fond du Lac Band of Lake Superior Chippewa .

Tanka Fund, a non-profit based in South Dakota, transported the buffalo in an effort to re-establish a sustainable buffalo economy that enriches Native lives.

“Buffalo were almost too near extinction in the late 1800s, and now we have I think there’s estimates of about 500,000 across the nation that have come back through private producers, nonprofits, and tribal herds,” said Tanka Fund Business Development Director Arnell Abold. “Ideally, we would like to just continue to grow them. With the right management and the right attitudes and celebrations, it’s turning around. It’s very successful. So we’re very happy to be a part of that.”

While part of the inspiration is the conservation of the species, restoring buffalo to Native lands also has cultural significance.

“This buffalo is important in indigenous communities, and just there’s a cultural and a spiritual connection and that comes from many, many years ago through hundreds of years, thousands of years ago, where we worked continuously together,” explained Abold. “The buffalo and the people surviving through the times. They were our food, clothing, shelter. And we took care of them. They take care of us.”

The land that Native Wise is on has been in the same family for many generations.

“I didn’t really realize how far it went back until I started doing some research,” said Wise. “As a kid, we only lived probably three miles from here. And there’s trails through the woods to my grandmother’s place, right where I lived, over near where she lived, and so we would even walk over here when I was a kid to visit my great aunt. She was a great baker. She has an old, old time wood stove in the house that’s still in there.”

Learning more about his family history inspired Wise to bring buffalo back to the farm. This is the first time buffalo have been within the reservation boundaries of the Fond du Lac Band of Lake Superior Chippewa since European colonization.

“I was actually writing an article about my family tree, and Chief Buffalo was my great-great-grandfather. After writing that story about him, I had a dream and he said, ‘Bring back my namesake’,” said Wise.

The arrival of the buffalo was celebrated Friday afternoon with a prayer, a welcoming song for the buffalo, and a community meal.

“Today is really about just being present at the celebration and celebrating bringing the cultural buffalo to indigenous communities,” said Dunham.

The buffalo are currently in a corral while they get used to their new home. Wise hopes to open gates to give them plenty of room to roam within the next few days.

“I mean, it’s a dream. I just hope it keeps going, you know, we tried to build really good fences and, you know, we’re trying to give them a good spot to forage,” said Wise. “I think they’ll really do great food source for the community. We plan on doing some ceremonial harvest and maybe some food donations for different ceremonies and things like that.”