Tonight will have light snow slowly moving east out of the area. A Winter Weather Advisory has been issued for Lake and Cook County, set to expire at noon on Tuesday. Snowfall amounts will be mostly in the 1-3″ range, but higher amounts are possible in the higher terrain of the North Shore.

Frigid air will follow the snow. Overnight lows will range from -10 degrees in Bemidji to 11 degrees in Grand Marais. Wind chills Tuesday morning will be mostly in the negative teens and get worse during the day as a gusty westerly wind picks up speed. By 10pm, wind chills are expected to be in the negative twenties.

Colder temperatures will continue for the next few days. Many areas will stay below zero from Tuesday evening until Saturday afternoon.

Another focus this week is on another potential winter storm starting Wednesday. This round of snow will be lengthy, with snow chances continuing for the remainder of the week. Although it will be the light, fluffy type of snow, it will only add to the amount that is already on trees. This may result in more tree branches breaking power lines, especially with the strong winds expected with this storm.

Snowfall totals are uncertain during this time, but we will definitely see impactful snow combined with strong winds and potential whiteout conditions. A Winter Storm Warning has been issued for Aitkin County and areas east, effective from noon Wednesday until noon Thursday. 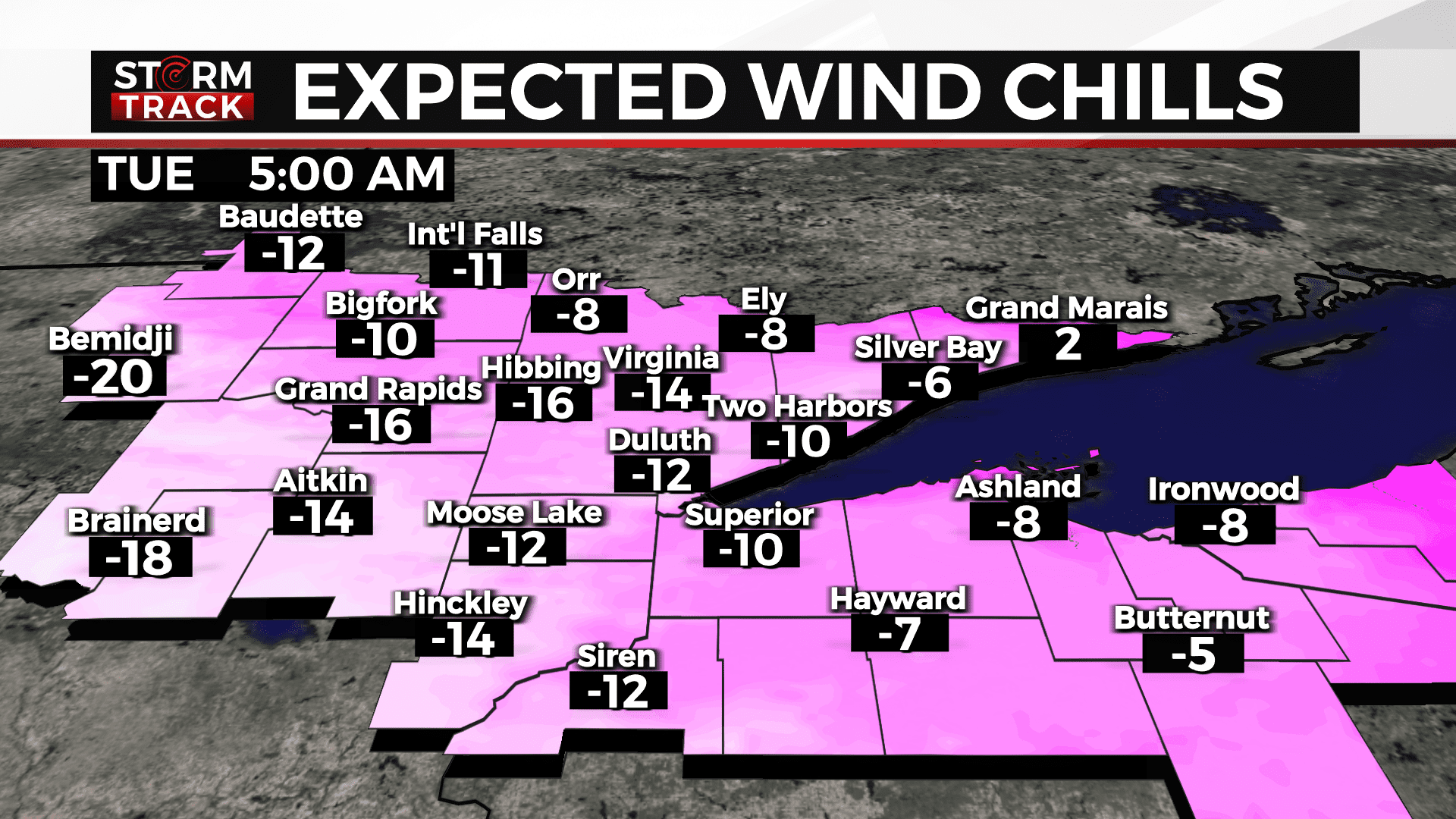 Wind chills Tuesday morning will be mostly in the negative teens and get worse during the day as a gusty westerly wind picks up speed.

The forecast will get more specific as we get closer to Wednesday, but pre-holiday travel is expected to be impacted.

Snow, mainly before 11pm. Low around -1. Light and variable wind becoming west 5 to 10 mph in the evening. Winds could gust as high as 20 mph. Chance of precipitation is 100%. New snow accumulation of 1 to 3 inches possible.

Snow likely, mainly after noon. Mostly cloudy and cold, with a high near -2. West wind around 5 mph becoming northeast in the afternoon. Chance of precipitation is 70%. New snow accumulation of around an inch possible.

Partly sunny, with a high near 10. Northwest wind around 10 mph, with gusts as high as 15 mph.