After falling in this weekends game to Bemidji State, the University of Minnesota Duluth (UMD) football team returns to Duluth for their last home game of the season.

A bitter sweet moment for the seniors this year who this weekends game against Minot State could very much be their last at Malosky Stadium. A place where they are undefeated this season.

“Just a great atmosphere we have here on the Bulldog walk and everything makes it a really cool place to play. So it’ll be really special getting to go out there one last time,” said senior defensive back Jonny Jensen.

“It is coming to an end here, it’ll be an emotional day for all of our seniors here. Also for me personally, you know, it’s been a heck of a ride. I’m just looking forward to having one more opportunity in here, make good on it and hopefully come out with a win,” added grad student running back Wade Sullivan.

For the Bulldogs however all their losses this season have been followed up with victories, thanks in part to the senior leadership. 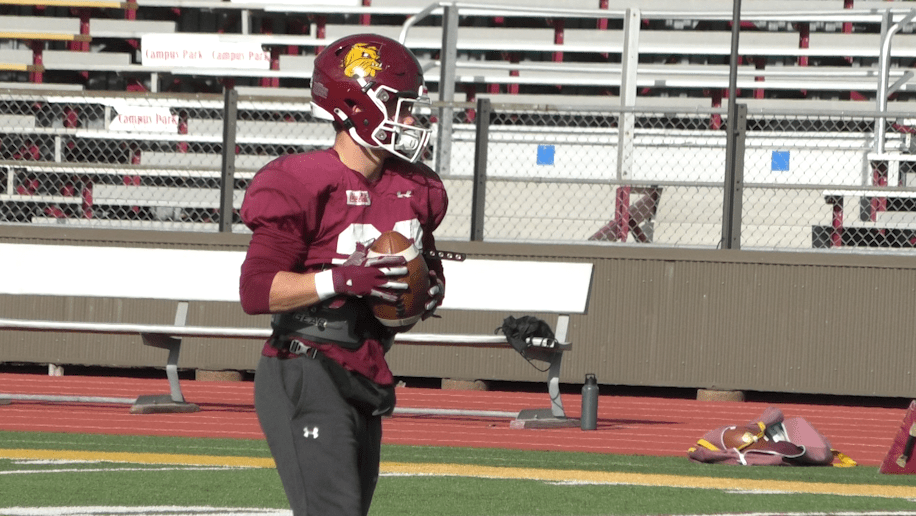 Wade Sullivan at practice on Monday.

“The captains, starting with those guys as fifth and sixth year seniors have been tremendous. They’ve been hard nosed, they’ve been very serious. They’ve met every expectation that we’ve asked them to do throughout the off season and throughout the season. So we’re hoping that our underclassmen can learn from what these guys have instilled in their football program,” said head coach Curt Wiese.

Saturday UMD runs through the tunnel at home against Minot State, with kickoff at 1:00 p.m.