Beyond the Playbook: Final “Jug” game between Carlton and Wrenshall boys’ basketball

A final chapter has been etched into what was called the ‘Battle for the Jug’ earlier this month between the Wrenshall and Carlton boys’ basketball teams.

A tradition that began in 1951 as a clash between two small town basketball programs in the Wrenshall Wrens and Carlton Bulldogs boy’s teams.

Where every season they would battle for ownership of the “Little Brown Jug” in what was dubbed the Jug game.

Writing down the year and score of the team that claimed possession, with the only rule being that the Jug can only be taken when on the opposition’s court.

“I expected everything it was, from the intensity to the atmosphere. To even the nerves for the kids.” Said Carlton head coach Shawn Filipika. 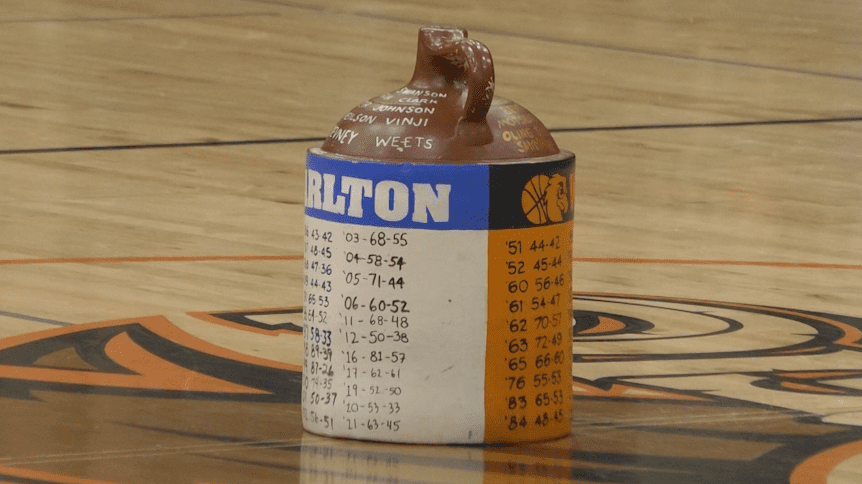 The little brown Jug sits at center court for the final time on January 10th at Wrenshall.

This season Carlton won the opening game 76-63. However on January 10th, the final ever game the teams would be opposition, it was the Wrens who took it home winning by a single bucket 56-54.

“It is really special in your heart to know that you’re the last team to ever touch it and win it. We all know each other since we are so close. So we are all equally matched,” said Peyton Johnson a Wrenshall senior.

Due to wear and tear from its 72 years of service and repainting there is no way of telling which school won the jug more.

Still after this season the two programs, along with all Wren and Bulldog athletics, will merge into one team under the name of Raptors.

“That is the overall outlook, for the community to be one. To be together and make things bigger and better for everybody in the future, not just now,” added Filipika when asked what it means to merge school athletics.

For Wrens head coach Jon Bartczak it’s a mixed bag of emotions to be losing this part of ingrained history that you can’t find in just any other small schools.

“It’s a little heart breaking, I feel like this is a little bit of a loss just because this is what I grew up with. I went to Wrenshall and graduated in 2008. I played for the Jug, I played for it at Carlton and here at Wrenshall. That game means a lot, and to lose that game is really tough,” concluded Bartczak.

Still the memories of hard fought battles will always remain for those that took part in the spectacle as a fan or player.

Paving the way for the Carlton/Wrenshall Raptors to create a new tradition of their own.