The day he left for boot camp, Signalman Allen Westerberg began writing letters home. They were addressed to his parents and sister, but one day they would reach future generations too.

“Growing up, I always said, ‘Oh yeah, my dad fought in World War II.’ And they’d be like, ‘You mean your grandfather.’ No, my dad. He was on LSM392 in the Pacific,” Joe Westerberg said. “Because he was almost 45 when I came along.”

Joe Westerberg says his dad Allen didn’t talk much about the war.

There were more than 900 letters chronicling the insects he was collecting, the people he’d met, and what he ate. 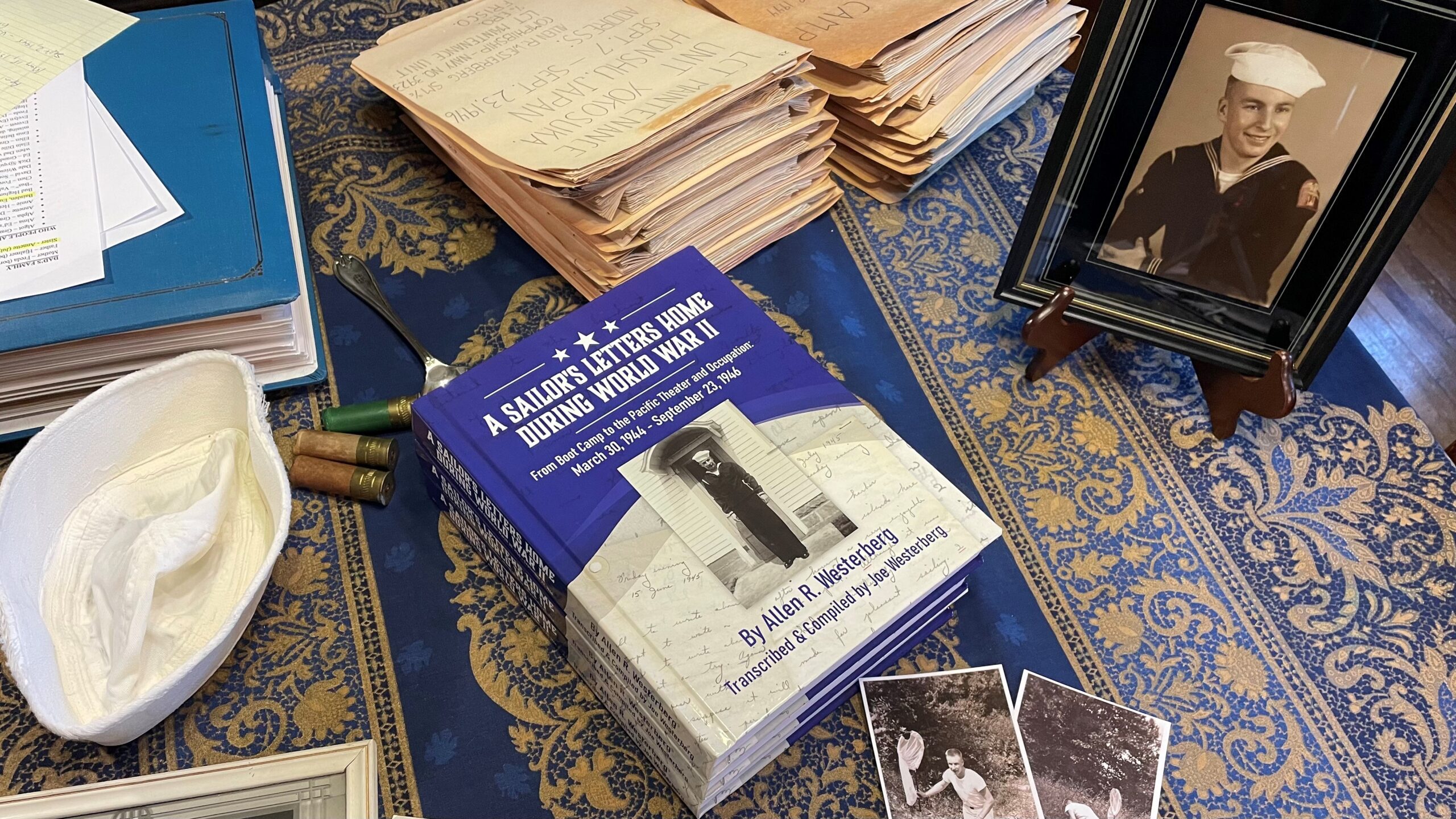 “He sent home in part of his scrapbook this menu when he ate in California at the Pig & Whistle. So I have this menu from 1945, lists all the prices, and it’s the full menu,” Joe said.

“It’s been 20 years since I very first started,” Joe said.

He spent two decades transcribing each and every one of his father’s letters by hand.

“I had about 9 months of letters left, and COVID hit. And I told my wife, I said, ‘I’m going to finish these,'” Joe said.

Some of them are censored, with squares of the letter cut out.

“He mentions places, obviously, just from reading, you know, ‘In the letter that I got just before leaving blank,'” Joe read. “It’s stamped at the top, ‘Passed by Naval Censor.'”

His dad wrote some letters in code.

“He had told his family, any letters that I start out let’s say 8 May ’45, so date before month, take the first letter of every sentence in the first paragraph, and that will be a code,” Joe Westerberg described.

They would spell out things like “Nearing Hawaii.” Joe says through these letters, he got to see his dad grow up.

“Whether he knew it or not, this is a firsthand account of history in World War II from just your general sailor, an 18-year-old kid from a small town in Minnesota going into the largest conflict that the world has ever seen.”

Others can read the account now too. With the help of a Kickstarter campaign, Signalman Westerberg’s letters have been published.

“It’s kind of fun to know that my dad is an author now, you know?” Joe said.

He plans to donate the letters themselves to the WWII Museum in New Orleans. But he’s keeping a few other things, like the spoon his dad “liberated” from the Imperial Hotel in Tokyo.

“It’s another little fun thing that I learned about my dad was, OK, he did break the rules,” he said. “It makes him more human.”

“Sept. 2, 1945, the VJ Day when Japan signed the surrender documents, all of the ships were given permission to basically let loose with flares and shells and whatever,” Westerberg said. “He says in his letters he shot off three shells, and those are the shells. So I know where he was, who shot them, why they were shot, and I actually have the shells.”

They are physical mementoes to illustrate the letters now bound in hardcover.

“I only wish that Dad were around to see it,” he said. “October 13th was the anniversary of his passing, and so I was down bringing my mom to Fort Snelling – that’s where he is – and I brought a copy to Dad. So I think he’s proud.”

His service is now stamped in history.

“It turned out better than I thought it ever could,” Joe said.

The book can be purchased on Amazon.