Dance can take place anywhere, and for one local team, their love for the sport took them to the southern region over the weekend for a competition.

It wasn’t all fun in the Florida sun for the University of Minnesota Duluth dance team. They had one goal in mind when they set out for Orlando, to compete to the best of their abilities and have fun. All of that came to fruition, along with winning a national title.

“You have all the dance teams there, and you are seeing dancers that even you look up to that you are competing on the same level is super fun and prepping for it. We practice a lot down there, parking lot practices. We like to call them up until like midnight sometimes. Yeah, it’s just definitely a surreal feeling,” said Junior dance member Marren Neeb.

The completion happened on Friday, January 13th, and wrapped up on Sunday, January 15th. The Bulldogs claimed 1st place in the jazz event and 3rd in the pom event. Both wins were historic for the team, as they have only been competing in the pom event for the past four years. Several other Minnesota schools were at the competition too.

“It still feels like it has not really set in that we made history on the dance team. It was so such a rewarding experience to be with our teammates while hearing our names announced in first place. It was so fun at the awards; we got to see our coaches crystal clear, and we got to see their reactions and them jumping up and down with us. It was really, really fun to be able to experience that was such a great team,” Senior Captain Jessica Laurance shared. 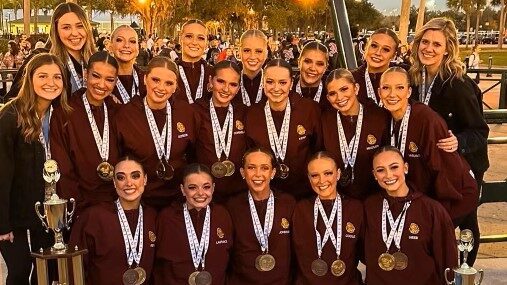 Before making history, the team’s journey to a national title wasn’t easy as Laurance mentioned that they faced some trials and tribulations. “When the season started, we had a few girls that were not really feeling the dance team. They had outside problems and we were all very supportive of their decisions. I think through that we kind of realized how special the dance team is and how honored and grateful we were to be able to continue to be dancing at such a collegiate level.”

Now proudly sporting new hardware, the question is: What is next for the Bulldogs? “It’s easy to get to the top, it’s harder to stay there. So we know that we’re going to have to work ten times harder if they want to keep their spot because every dance team is going to be coming out fighting through the entire state. Minnesota is known for its awesome dance teams, and the top three in jazz were all from Minnesota, and the same with pom. It’s great to have that local competition, but know that we’re all going to push each other to become better,” shared one of the Head Coach, Alli Mackner.