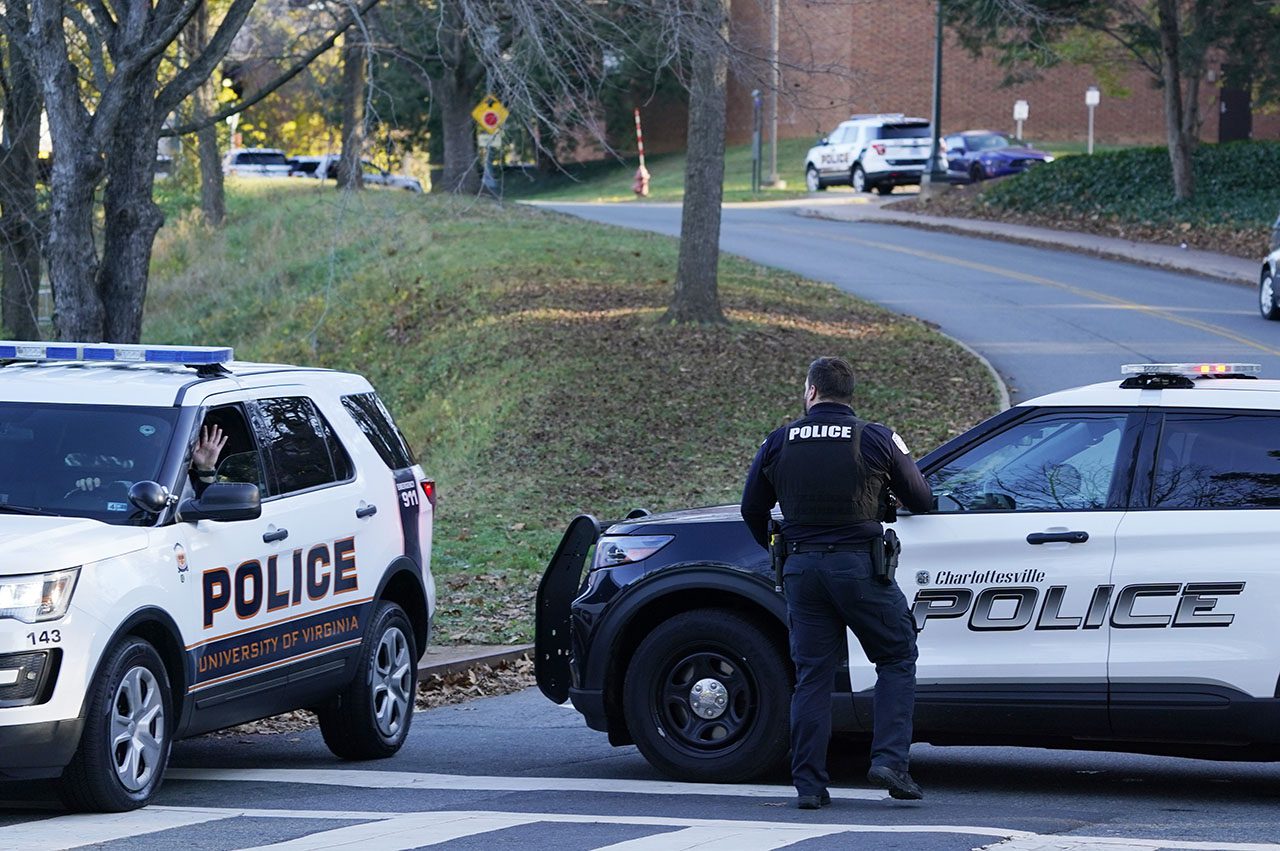 Charlottesville police secure a crime scene of an overnight shooting at the University of Virginia, Monday, Nov. 14, 2022, in Charlottesville. Va. (AP Photo/Steve Helber)

CHARLOTTESVILLE, Va. (AP) — Police on Monday captured a University of Virginia student suspected of fatally shooting three members of the school’s football team as they returned to campus from a field trip.

The violence that also wounded two students erupted near a parking garage and sent the campus into a lockdown that lasted overnight while police searched for the gunman.

Officials got word during a midmorning news briefing that the suspect, Christopher Darnell Jones Jr., 22, had been arrested.

“Just give me a moment to thank God, breathe a sigh of relief,” university Police Chief Timothy Longo Sr. said after learning Jones was in custody.

The shooting happened just after 10:15 p.m. Sunday as a charter bus full of students returned from seeing a play in Washington.

University President Jim Ryan said authorities did not have a “full understanding” of the motive or circumstances surrounding the shooting.

“The entire university community is grieving this morning,” a visibly strained Ryan said. “My heart is broken for the victims and their families and for all those who knew and loved them.”

Ryan identified the three students who were killed as: Devin Chandler, Lavel Davis Jr. and D’Sean Perry. He said one of the wounded students was hospitalized in critical condition, and the other was in good condition.

The shooting touched off an intense manhunt, with authorities conducting a building-by-building search of the campus while students sheltered in place for more than 12 hours. The lockdown order was lifted late Monday morning.

Police obtained arrest warrants for Jones charging him with three counts of second-degree murder and three counts of using a handgun in the commission of a felony, Longo said.

Jones had once played on the football team, but he had not been a member of the team for at least a year, Longo said.

Jones came to the attention of the university’s threat assessment team this fall after a person unaffiliated with the school reported a remark Jones apparently made about possessing a gun, Longo said.

No threat was reported in conjunction with the concern about the weapon, but officials looked into it, following up with Jones’ roommate.

Longo also said Jones had been involved in a “hazing investigation of some sort.” He said he did not have all the facts and circumstances of that case, though he said the probe was closed after witnesses failed to cooperate.

In addition, officials learned about a prior incident outside Charlottesville involving a weapons violation, Longo said. That incident was not reported to the university as it should have been, he said.

Eva Surovell, the editor in chief of the student newspaper, The Cavalier Daily, said that after students received an alert about an active shooter late Sunday night, she ran to the parking garage, but saw that it was blocked off by police. When she went to a nearby intersection, she was told to go shelter in place.

“A police officer told me that the shooter was nearby, and I needed to return home as soon as possible,” she said.

She waited with other reporters, hoping to get additional details, then returned to her room to start working on the story. The gravity of the situation sunk in.

“My generation is certainly one that’s grown up with generalized gun violence, but that doesn’t make it any easier when it’s your own community,” she said.

Elsewhere, police in Moscow, Idaho, were investigating the deaths of four University of Idaho students found Sunday in a home near the campus.

Officers discovered the deaths when they responded to a report of an unconscious person, authorities said.