Jeremy Laundergan loves his home on Lake Superior, which he and his wife bought in 2012. The engineer lived in California for 18 years, but grew up here. So he’s glad to be back.

It’s a modest home, but Laundergan told us the value has nearly doubled in the past 10 years. “At the current valuation of this house, I would not be able to make a down payment and buy this house. It would have been out of my price range. But it was affordable, at the end of the housing recession.”

He’s concerned about it becoming unaffordable, due to the increases in property taxes. “When year over year, we’re seeing a 21% increase in the property tax bill. How do you budget for that?” Estimates went out recently for 2023.

In September, when the Duluth City Council set the preliminary property tax levy at 8.9%, he took his concerns to a meeting. “It made me feel frustrated. The response was, well, we’ll have to cut services. But when you look at the city budget, they’re flagging themselves as unsustainable for the health care costs.”

City leaders said they understand the angst. “If you’re not seeing an increase in services and your tax bill is going up, naturally you’re wondering what is happening,” shared Arik Forsman, council president. 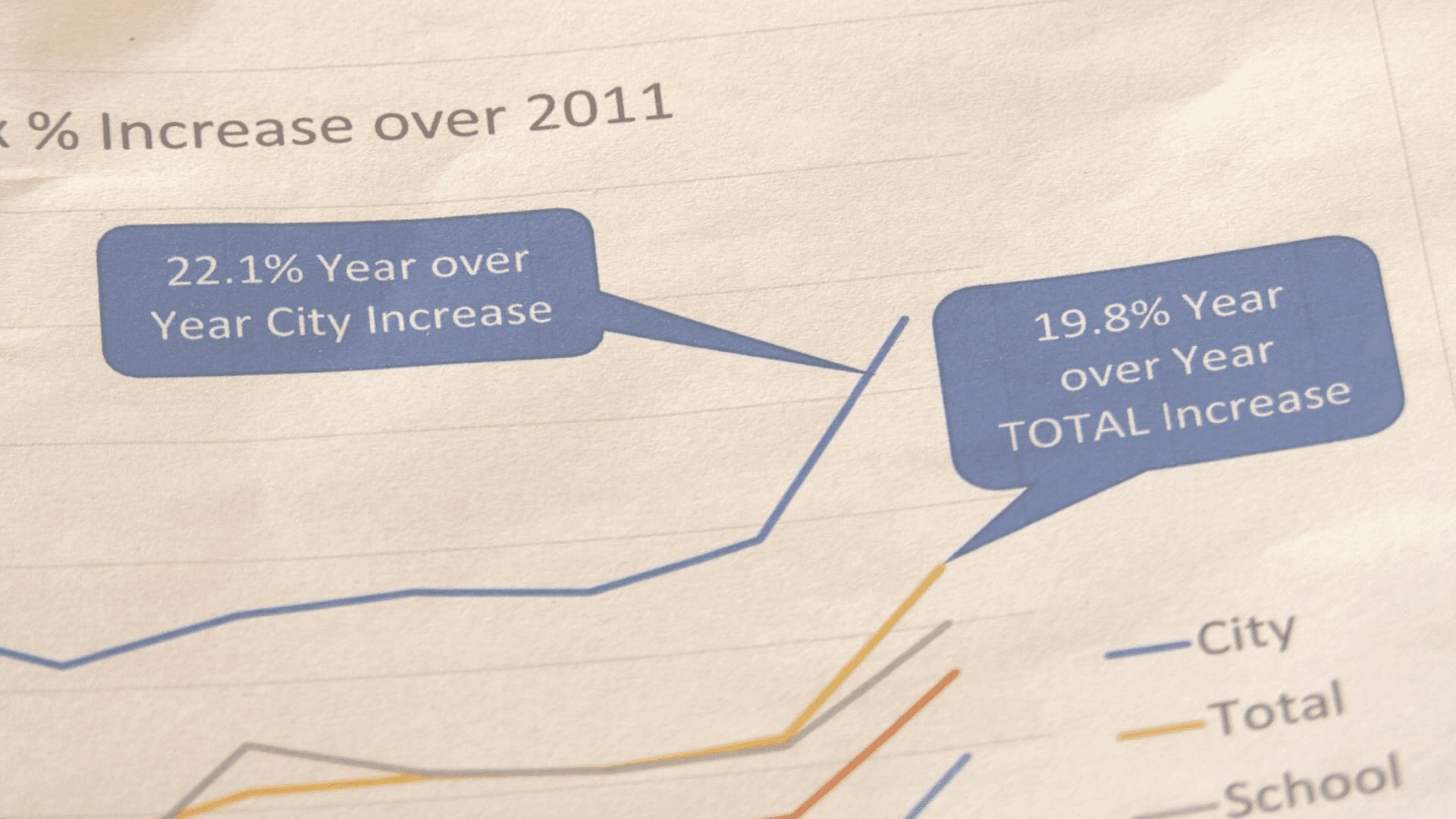 He said inflation, related to health care costs and salaries, are a major factor. And the problem is only going to be more challenging.

“I do have concerns about the trajectory the budget is on, long term,” he added.

Additional help from LGA, Local Government Aid, could make a difference. But generating new revenue and cutting expenses are key. And those are also challenging.

“The public wants the city to figure it out, as well as other government units. But what does figuring it out look like? It means that the mayor, the city council, and the employees have to work together on a solution,” Forsman said.

For Laundergan, his own personal solution is a lot of DIY. “I do all the projects around here myself. It took me four years to repair the damage from the flood in 2012, which happened right after we moved in,” he said.

And he said no to the recent parks referendum. “I haven’t voted against a measure like that in my life. But I knew this tax bill was coming. And I was like, nope, I simply cannot chip in even more. They need to understand everyone is feeling squeezed.”

Mary Garness, Public Records and Property Valuation Director for St. Louis County, sat down with WDIO and refreshed us about the valuation process.

“We go out and do inspections in the fall, and follow up on building permits and if there’s new construction. Then we look at the sales information. All of that data is compiled, and the process is established by the Department of Revenue,” she told us.

On average, it was an 19.5% increase for the whole county, on the residential side. Commercial properties went up an average of 4.4%, according to Garness.

Garness said it’s largely due to the sales market. “We hear frustrations all of the time. Because it is hard, and we know that. But we have strict guidelines we have to follow.”

The time to appeal the valuation for 2023 has passed. Here’s a link of what choices you have: https://www.stlouiscountymn.gov/departments-a-z/assessor/assessment-process/appeals-process

But you could still look at going to Tax Court.

People are reminded they can contact the Assessor’s Department at any time with questions about their property’s classification and valuation by calling 1 (800) 450-9777, or email assrdept@stlouiscountymn.gov.

Meanwhile, questions about property tax statements can be directed to the Auditor’s Office by calling (218) 726-2383, extension 2; or email PropertyTax@stlouiscountymn.gov.

Here’s more from the Department of Revenue: https://www.revenue.state.mn.us/appealing-property-value-and-classification

There are meetings about the proposed tax increases coming up:

St. Louis County will vote on their budget on December 13th at their meeting in Duluth.