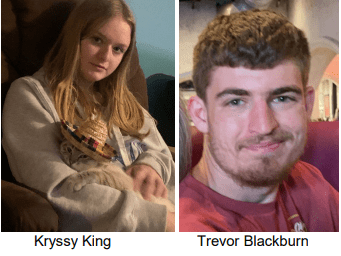 Kryssy King, 15, was reported missing on Oct 1 and is believed to be with Trevor Blackburn, 22. (Minnesota Crime Alert Network)

UPDATE: Authorities say a man is in custody after allegedly being connected to the disappearance of a Wisconsin teen on Sunday. An Amber Alert had been issued for 15-year-old Kryssy A. King. King was located safe around 8 p.m. Sunday.

Multiple agencies were involved with this investigation, including the FBI, the Wisconsin Department of Justice, the Wisconsin State Patrol, as well as multiple Sheriff’s Offices and local police departments.

No other details have bee released and the investigation continues.

Original Story: The Chippewa County Sheriff’s Office in Wisconsin is requesting the public’s assistance in locating Kryssy King, 15. Kryssy is believed to be in the company of Trevor Blackburn, 22. It is unknown which vehicle they would be driving.

Kryssy is white, 5’3″, and 150 pounds. She has blonde or strawberry hair, hazel eyes, and a small scar on her nose by her eye and a long scar on her left shoulder. Kryssy was discovered missing from her residence in Holcombe on Saturday morning.

Trevor Blackburn is a white male with brown hair, a tattoo of a name on his chest, and a heart tattoo on his inner forearm.