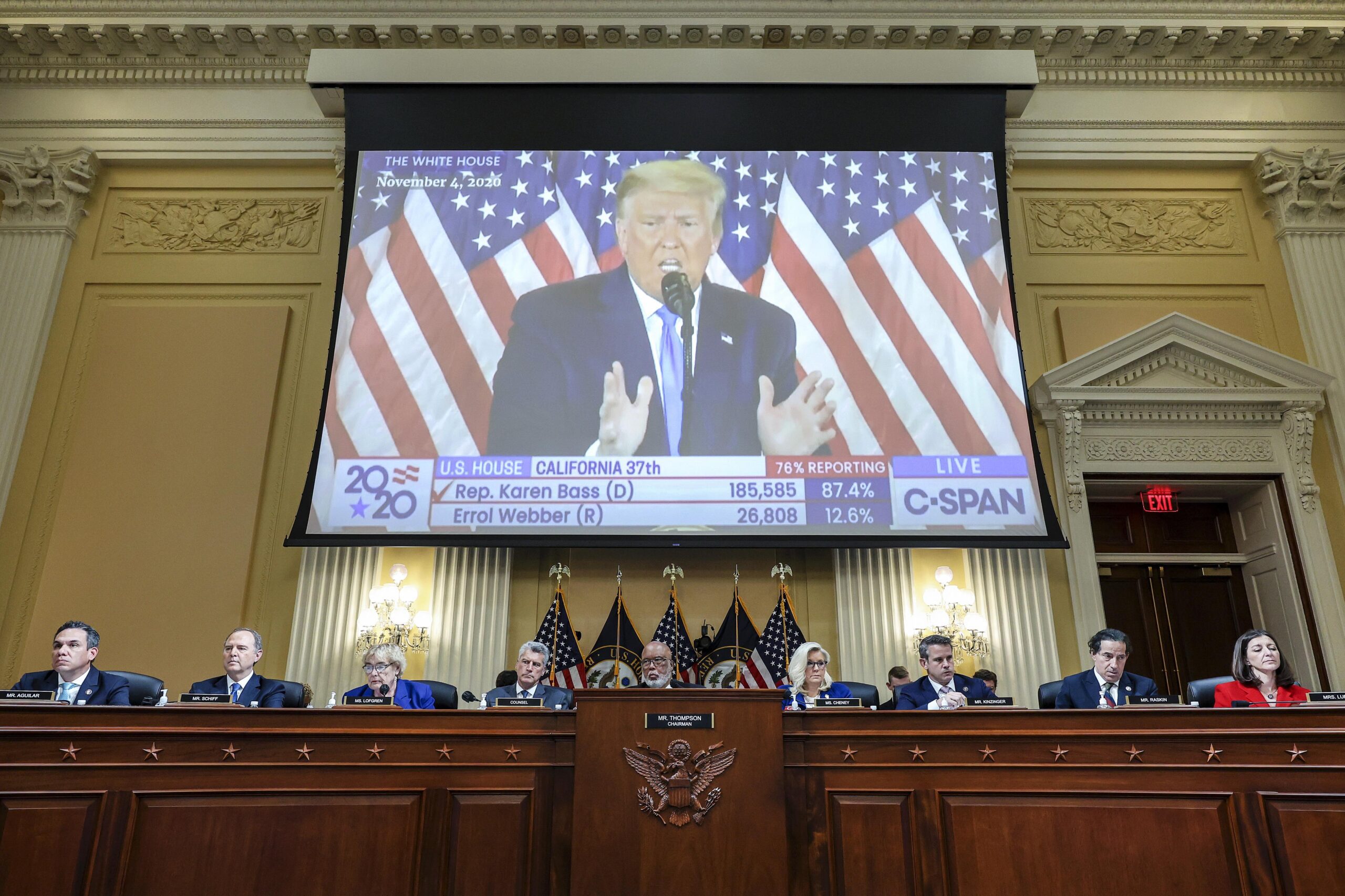 A video of then-President Donald Trump speaking is displayed as the House select committee investigating the Jan. 6 attack on the U.S. Capitol holds a hearing on Capitol Hill in Washington, Thursday, Oct. 13, 2022. (Alex Wong/Pool Photo via AP)

With alarming messages from the U.S. Secret Service warning of violence and vivid new video of congressional leaders pleading for help, the panel showed the raw desperation at the Capitol. Using language frequently seen in criminal indictments, the panel said that Trump had acted in a “premeditated” way ahead of Jan. 6, 2021, despite countless aides and officials telling him he had lost.

Trump is almost certain to fight the subpoena and decline to testify. On his social media outlet he blasted members for not asking him earlier — though he didn’t say he would have complied —and called the panel “a total BUST.”

“We must seek the testimony under oath of January 6’s central player,” said Republican Rep. Liz Cheney of Wyoming, the committee’s vice chair, ahead of the vote.

In the committee’s 10th public session, just weeks before the congressional midterm elections, the panel summed up Trump’s “staggering betrayal” of his oath of office, as Chairman Bennie Thompson put it, describing the former president’s unprecedented attempt to stop Congress from certifying Democrat Joe Biden’s victory.

While the effort to subpoena Trump may languish, more a nod to history than an effective summons, the committee has made clear it is considering whether to send its findings in a criminal referral to the Justice Department.

In never-before-seen Secret Service messages, the panel produced evidence that extremist groups provided the muscle in the fight for Trump’s presidency, planning weeks before the attack to send a violent force to Washington.

The Secret Service warned in a Dec. 26, 2020, email of a tip that members of the right-wing Proud Boys planned to outnumber the police in a march in Washington on Jan. 6..

“It felt like the calm before the storm,” one Secret Service agent wrote in a group chat.

To describe the president’s mindset, the committee divulged new material, including interviews with Trump’s top aides and Cabinet officials — including Secretary of State Mike Pompeo, Attorney General William Barr and Labor Secretary Eugene Scalia — in which some described the president acknowledging that he had lost.

In one, according to ex-White House official Alyssa Farah Griffin, Trump looked up at a television and said, “Can you believe I lost to this (expletive) guy?”

Cabinet members also said in interviews shown at the hearing that they believed that once legal avenues had been exhausted, that should have been the end of Trump’s efforts to remain in power.

“In my view, that was the end of the matter,” Barr said of the Dec. 14 vote of the Electoral College.

But rather than the end of Trump’s efforts, it was only the beginning — as the president summoned the crowd to Washington on Jan. 6.

The panel showed clips of Trump at his rally near the White House that day saying the opposite of what he had been told, then telling supporters he would march with them to the Capitol. That never happened.

“There is no defense that Donald Trump was duped or irrational,” said Cheney. “No president can defy the rule of law and act this way in our constitutional republic, period.”

Thursday’s hearing opened at a mostly empty Capitol complex, with most lawmakers at home campaigning. Several people who were among the thousands around the Capitol on Jan. 6 are now running for congressional office, some with Trump’s backing. Police officers who fought the mob filled the hearing room’s front row.

The House panel warned that the insurrection at the Capitol was not an isolated incident but a warning of the fragility of the nation’s democracy in the post-Trump era.

“None of this is normal,” Cheney said.

The panel showed previously unseen footage of congressional leaders phoning officials for help during the assault as Trump refused to call off the mob.

“They’re breaking the law in many different ways — quite frankly at the instigation of the president of the United States,” Pelosi is heard saying at one point.

The panel also showed new video of Vice President Mike Pence — not Trump — stepping in to help calm the violence, speaking directly with Capitol Police, as Congress planned to resume its session that night to certify Biden’s election.

Along with interviews, the committee is drawing on the trove of 1.5 million documents it received from the Secret Service, including an email from Dec. 11, 2020, the day the Supreme Court rejected one of the main lawsuits Trump’s team had brought against the election results.

White House aide Cassidy Hutchinson, a top aide to then-chief of staff Mark Meadows, recalled Trump being “fired up” about the court’s ruling.

Trump told Meadows “something to the effect of: ‘I don’t want people to know we lost, Mark. This is embarrassing. Figure it out,’” Hutchinson told the panel in a recorded interview.

Thursday’s session served as a closing argument for the panel’s two Republican lawmakers, Cheney of Wyoming and Adam Kinzinger of Illinois, who have essentially been shunned by Trump and their party and will not be returning in the new Congress. Cheney lost her primary election, and Kinzinger decided not to run.

The committee, having conducted more than 1,500 interviews and obtained countless documents, has produced a sweeping probe of Trump’s activities from his defeat in the November election to the Capitol attack.

Under committee rules, the Jan. 6 panel is to produce a report of its findings, likely in December. The committee will dissolve 30 days after publication of that report, and with the new Congress in January.

At least five people died in the Jan. 6 attack and its aftermath, including a Trump supporter shot and killed by Capitol Police.

More than 850 people have been charged by the Justice Department, some receiving lengthy prison sentences for their roles. Several leaders and associates of the extremist Oath Keepers and Proud Boys have been charged with sedition.

Trump faces various state and federal investigations over his actions in the election and its aftermath.