Fire has destroyed two warehouses in Superior’s North End that date to the late 1800s.

Superior Fire Chief Scott Gordon says the fire was first reported at 1507 North 1st Street at 5:50 a.m. Flames were visible from the exterior when crews arrived, and fire commanders made a decision not to enter the building due to safety reasons.

The environment made it difficult for firefighters to navigate a way to fight the flames. Chief Gordon says, “Certainly dangerous is the first word that comes to mind. These are big buildings. Big buildings with a lot of fire as everybody saw. And then adding in the temperatures at 10 below at a start time at 6:00am this morning.”

The fire later spread to the building at 1515 North 1st Street. Both buildings are a complete loss. The fire Chief says, “The first building that caught on the east was so hot and as it started to collapse and crumbling down, with the electrical wires with it, it limited our ability to get water in there… now it’s about keeping that second building from spreading anywhere else.”

Officials continue to monitor the hot spots that still were burning Thursday night. 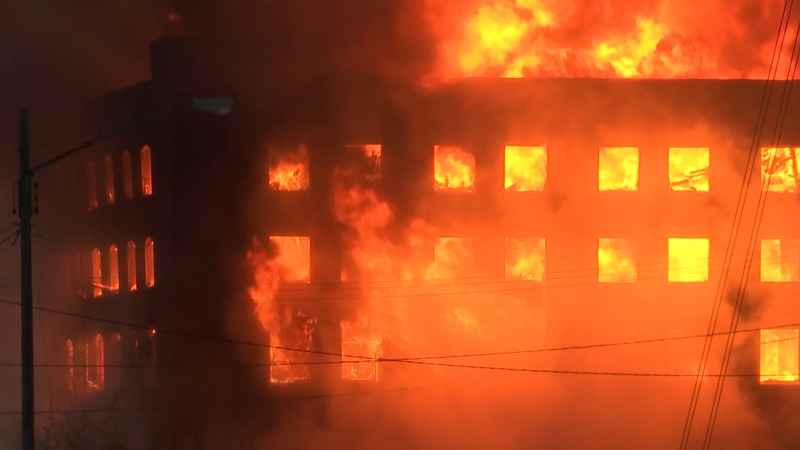 The buildings are about a block west of the Blatnik Bridge, which was closed for an hour. It reopened after the National Weather Service and Emergency Management determined that the weather pattern would not change drastically change the smoke plume.

Douglas County records show the property at 1507 North 1st Street is owned by Duluth Superior Concrete Services. The Wisconsin Historical Society says it was originally Osborne Mercantile and was later home to Lake Superior Fishing Company. It was currently listed for sale, touted as a property for redevelopment, with an asking price of $795,000.

The property at 1515 North 1st Street is owned by Eric J. Ringsred’s Black River Mills Inc. The Wisconsin Historical Society says the building was constructed in 1894 as the Twohy Mercantile Building and was later known as Bayside Warehouse.

The fire department called in 13 off-duty members, having 14 staff members on the scene, to ensure that all three of the city’s fire stations were staffed during the fire response.

The mayor of Superior is extremely grateful that the team was able to contain the flames to just the two buildings. He says, “While there was some safety risk at the beginning while the fire was really truly engulfed, the police department and fire department did a really good job taking decisive action to protect the public.”

The area remains off limits to the public as there hot spots continue to burn and with the chance of more parts of the rubble likely to collapse.