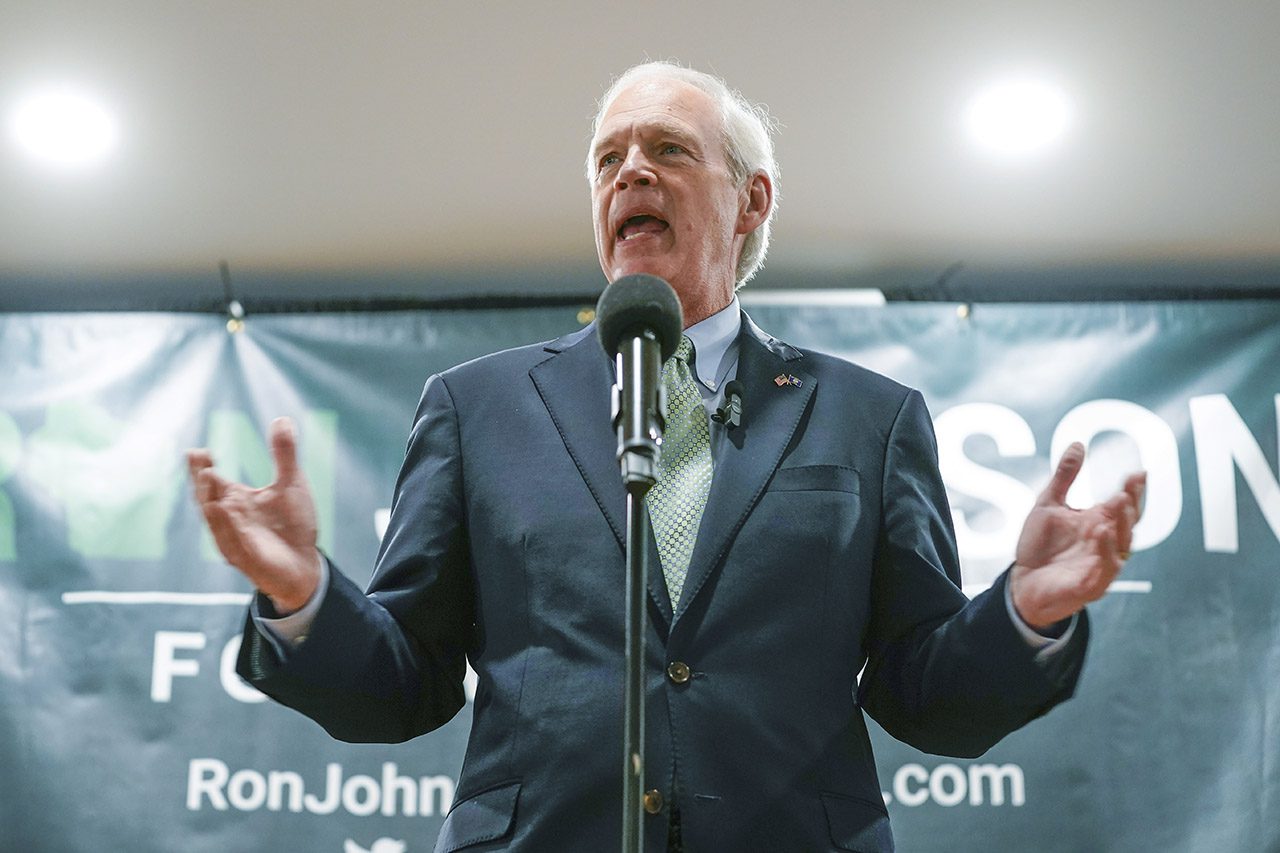 Wisconsin Republican Sen. Ron Johnson speaks at a rally with supporters Tuesday, Oct. 25, 2022, in Waukesha, Wis. Johnson and Democrat Mandela Barnes are honing closing arguments in a Wisconsin race that could be critical in which party controls the U.S. Senate. (AP Photo/Morry Gash)

MADISON, Wis. (AP) — Republican U.S. Sen. Ron Johnson seeks to win a third term in battleground Wisconsin against Mandela Barnes, a Democrat hoping to make history as the state’s first Black senator, in one of the handful of races that could determine which party controls the chamber.

Johnson, one of former President Donald Trump’s biggest backers, painted Barnes as “dangerous” and soft on crime, hitting on one of the GOP’s biggest campaign themes this cycle as it tries to win back control of the Senate.

Both Barnes and Johnson each attempted to paint the other as too radical for Wisconsin, a perennial swing state that Trump won in 2016 but lost in 2020 to President Joe Biden by slim margins each time.

“Other than hollow left-wing rhetoric, I’m not sure what he’s ever accomplished or what he has to offer,” Johnson said of Barnes in a debate.

Barnes emerged from his August primary victory with a slight lead in the polls, but saw that advantage disappear under a barrage of attack ads on the crime issue.

Like many Democrats, Barnes tried to make the race about abortion rights. Johnson, a longtime backer of making abortion illegal, tried to blunt the issue by saying he supported a state referendum to let voters decide the issue. But he opposed an effort by Democratic Gov. Tony Evers to make such a vote possible.

“Women’s lives and women’s health is on the line,” Barnes said in a debate.

Johnson once said he wouldn’t seek a third term, then explained his change of heart in January by saying he saw the country in peril.

Barnes went after him over a series of provocative statements that coincided with Johnson’s drift to the right during the Trump era, including Johnson’s disbelief in climate change; attempting to deliver fake Republican Electoral College ballots to then-Vice President Mike Pence on Jan. 6, 2021; saying that he would have been more fearful during that insurrection if the U.S. Capitol invaders had been Black Lives Matter protesters; and advocating for unproven and untested alternative treatments for COVID-19, such as mouthwash.

Barnes, in a debate, said Johnson wanted to “lie and distract and hide from his own record.”

Johnson called for the end of guaranteed money for Medicare and Social Security, two popular programs that American politicians usually steer clear from, calling it the only way to keep them viable. Biden himself went on the attack over those remarks, saying Johnson wants “to put Social Security and Medicare on the chopping block every year.”

Johnson portrayed Barnes as a rubber stamp of Biden and Democratic congressional leaders, saying their policies have led to high inflation and gas prices.

Barnes spent much of the race on the defensive explaining his earlier positions before he was a Senate candidate in support of ending cash bail and diverting funding for police departments. Barnes, 35, played up his middle class background, contrasting himself with Johnson, a 67-year-old millionaire who voted for a Trump tax bill that benefitted some of his wealthiest donors.

Check out https://apnews.com/hub/explaining-the-elections to learn more about the issues and factors at play in the 2022 midterm elections.