Saturday the Proctor/Hermantown and Duluth girls hockey teams entered their border town clash boasting the same 8-3-2 records. While the Mirage skated away with the 5-1 win the game, played on an outdoor rink, brought players and fans back to the roots of Northland hockey.

Sometimes being able to relive some of your childhood memories can be very cool, and over the past weekend, the Proctor/Hermantown Mirage and Duluth Northern Star girl’s hockey teams got to do just that.

“It’s actually so fun just to get on the ice and be outdoors because I know all of us used to play little kids out here, and in the crowd and playing with everyone, so it’s fun to be back out here,” said Mirage senior forward/center Nya Sieger.

The game and fun happened at the Fryberger Arena outdoor hockey rink in Woodland Park. “I have been working with Ali Randall, the Duluth coach, and Ashley from Woodland, and we just started this game last year. It’s just a fun way for our girls to kind of reset and go back to their younger years and in their career where they are playing outside,” Mirage Head Coach Emma Stauber shared.

The outdoor game provided the girls a moment to go back to their roots, where getting those skates and sticks on the ice started for most of the players. 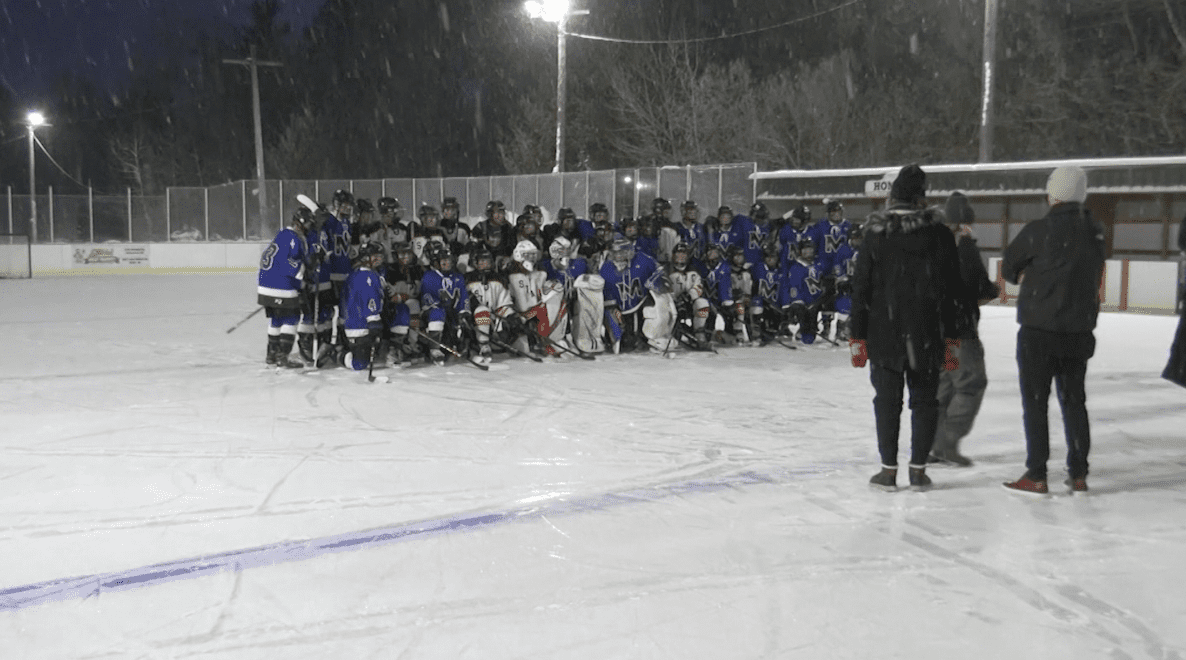 The Mirage and Northern Stars come together for a photo following their outdoor match Saturday at Woodland Park.

“All these girls grow up playing on the outdoor rinks, and it’s a part of them. It is part of these families and the culture that we have, especially here in northern Minnesota,” Stauber expressed.

When the puck drops, it’s game time! When the time runs out, and the game is over, that’s when helmets come off, and it’s the camaraderie, picture time, fun, and friendships.

“I have coached in the summer, and I have actually coached some of those Mirage girls, which is awesome. They grew up coming through youth hockey together and summer camps. So, seeing that camaraderie off the ice and peer-like competition on the ice takes all these games to the next level, and it’s fun. As a coach, you can’t try to recreate that in any other game except games like this,” Duluth Northern Stars Head Coach Ali Randall shared.

Seiger added, “It’s super special because a lot of us know each other, and we have played with each other in a bunch of stuff. It’s good to be out here and play against each other.

The encouragement and love from everyone that attended the game was seen and appreciated by both players and coaches.

“It was awesome! There’s not a big support, you know with girls’ sports and hockey especially. When people come out like this, it’s super special. It’s really fun to see everyone come out and support us because, you know, we are all here to have fun and support. It’s always good and I love it,” Stars senior forward Bailey Coole.

Randall also feels the same support for her team, “Being my first year, I’ve definitely felt this overwhelming support from the hockey community within the team and the program.”