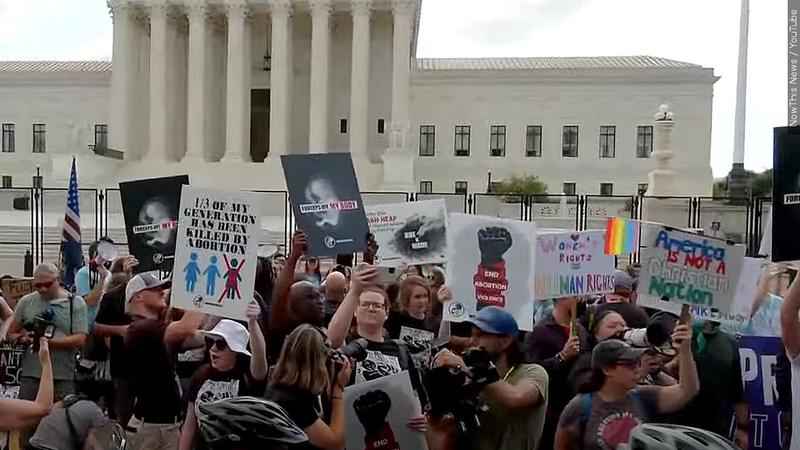 Protestors gather outside the US Supreme Courthouse, after the Roe V. Wade decision was overturned. [WDIO/MGN]

The immediate halt to abortions came even as questions remained about the enforceability of a 173-year-old state ban.

Women who were in Planned Parenthood clinics on Friday morning awaiting abortions were told that they couldn’t be done in Wisconsin. Instead, they were given help with scheduling appointments in other states, said Planned Parenthood Wisconsin President Tanya Atkinson.

Atkinson said offering travel assistance and helping women upon their return to Wisconsin will now be a focus of the group.

Wisconsin has an 1849 law that bans abortion, except to save the life of the mother, but whether that law is enforceable is expected to be challenged in court. Wisconsin Attorney General Josh Kaul, a Democrat, said he would have news next week about how his office would respond to Friday’s ruling.

“If the voters want a district attorney who prosecutes women for seeking an abortion or licensed providers who are acting in the best interest of their patients, they will need to elect someone else,” Ozanne said.

The nonpartisan Wisconsin Legislative Council, which is comprised of attorneys who advise the Legislature, indicated in a memo that the enforceability of the state ban will likely have to be decided by a judge.

Barbara Zabawa, an attorney who specializes in health care law and serves as an assistant professor at the University of Wisconsin-Milwaukee’s college of health sciences, said she believes Wisconsin’s abortion ban went back into effect when the Supreme Court issued its ruling, but that enforceability will be the issue.

It’s understandable that local prosecutors wouldn’t enforce a law that was written more than 100 years ago, declared unconstitutional in 1973 and then reinstated, said Sara Benesh, chairwoman of UW-Milwaukee’s political science department.

“All of this is going to have tons of litigation,” she said. “It’s going to be a disaster (for women with unwanted pregnancies) as we figure this out.”

Under the Wisconsin law, doctors could be charged with felonies for performing abortions and face up to six years in prison and $10,000 in fines.

A person who answered the phone at Affiliated Medical Services, which also provides abortions in Milwaukee, said it was busy contacting patients about the Supreme Court’s ruling and declined to comment further. Its website suggested that when Roe v. Wade is struck down, the group would stop providing abortions and instead “provide resources for out-of-state abortion clinics, travel support and general questions.”

UW Health said in a statement that, “While reverting to a 173-year-old state law on abortion will create some legal uncertainties, we recognize that this court decision has effectively banned abortions in Wisconsin except to save the life of the mother, and UW Health will continue to comply with the laws related to reproductive healthcare."

A large abortion rights rally was scheduled for Friday afternoon at the Capitol.

A Republican candidate for governor, Tim Michels, earlier this week called on Democratic Gov. Tony Evers to put the Wisconsin National Guard on alert in the event of violent protests. The office of an anti-abortion group in Madison was vandalized last month and no one has been arrested.

On Wednesday, the Republican-controlled Legislature refused to overturn the state’s ban, as Evers had called on them to do. Evers is making abortion rights a pillar of his reelection campaign, as are Democrats looking to take on Republican U.S. Sen. Ron Johnson.