Let’s say there are thunderstorms in the forecast, but you have outdoor plans. So you head out for your previously planned hike and grab your phone for updates. But as watches or warnings are being issued, you have to understand what they mean for you in your location and what steps need to be taken.

There are distinct differences between a watch and a warning. A watch indicates the risk of hazardous weather. A severe thunderstorm may impact your plans in the next several hours, but there isn’t an active concern right now. Have a plan in case a storm threatens. If you’re on a hike, know the nearest shelter and how long it will take you to get there. Be ready to act quickly. A warning means a severe weather event is occurring, imminent, or likely. Take action now. Seek shelter immediately.

In the case of a tornado, a watch is issued when conditions are favorable for tornadoes to form. Be prepared to take action if needed. Once tornado formation has begun, either as indicated by radar or a spotter, a tornado warning is issued. Take action now. A tornado emergency is an exceedingly rare tornado warning issued when there is a severe threat to human life and catastrophic damage is expected.

A storm doesn’t need to produce a tornado in order to present a threat to people and property. A Severe Thunderstorm Warning is issued when a strong thunderstorm is capable of either winds exceeding 58 mph or quarter-size hail. A severe thunderstorm warning indicates the potential for considerable damage when winds approach 70 mph or hail reaches golf ball-size. A destructive Severe Thunderstorm Warning indicates the potential for winds greater than 80 mph or baseball-sized hail. A destructive warning triggers wireless emergency alerts on devices.

If caught outside when a severe warning is issued, immediately seek shelter in a sturdy building. Taking shelter under a tree or even a shed can be deadly. Being prepared to act quickly is key to staying safe and minimizing impacts. 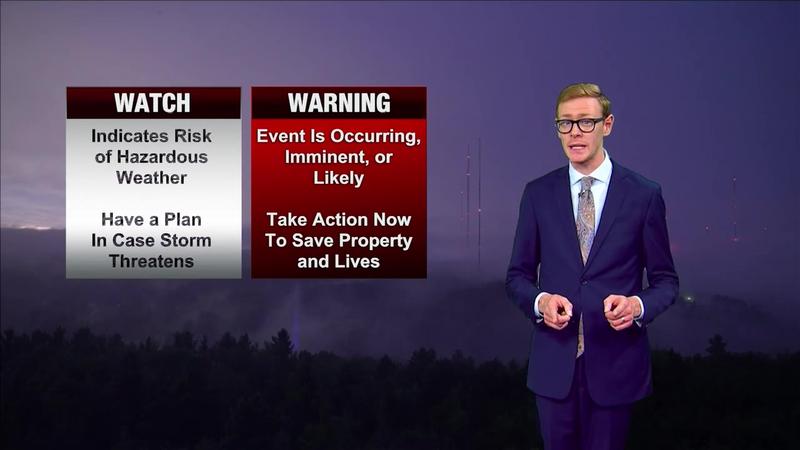