Throughout human history, we’ve been fascinated by bright flashes of light in the sky accompanied by a rumbling roar. We now know that this brilliant display isn’t caused by Thor swinging his hammer. What we’re seeing is an electrical discharge.

A towering thunderstorm cloud causes an electrical build up. Typically, the middle and lower parts of the cloud are negatively charged. The ground responds by becoming more positively charged.

Electrons zigzag down from the cloud creating a stepped leader. As the leader nears the ground, it draws a positive charge upward. As the leader and streamer merge, a powerful electrical current flows. The return stroke is what we see, traveling back to the cloud at 60,000 miles per second. The process may repeat several times along the same path, causing a flicker. All of this happens in less than a second.

There are different types of lightning depending on where the two charges come from. Cloud to ground is common, and that’s the one that is the most dangerous for us. It can happen within a cloud, cloud to sky, or cloud to cloud. Sometimes, the cloud to ground begins with a positive charge. Ground to cloud is when the stepped leader initiates from the surface.

Lightning is a stunning phenomenon, but it’s also very dangerous. No place outside is safe when a thunderstorm is in the area. When thunder roars, stay indoors. 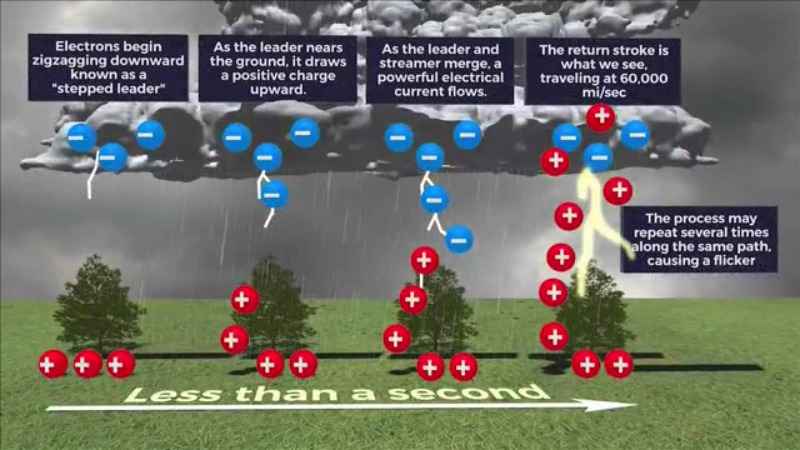