When tracking severe thunderstorms, a common term we use is damaging winds. This refers to a thunderstorm wind that can pose a threat to people and property, which is a wind stronger than >58 mph. Any severe wind that is not associated with a tornado is referred to as a straight-line wind. Straight lined wind events include a gust front, a downburst, and a derecho.

When a thunderstorm begins to rain, cooler air rushes to the surface, forming a downdraft. The air hits the ground and spreads out. The gust front is the leading edge of the air escaping the thunderstorm. A gust front often brings a wind shift, a drop in temperatures, and a sudden gust of wind that may be strong enough to do some damage.

A downburst is much more localized and more intense than a gust front. It begins with dry air mixing in with the precipitation which causes the droplets to evaporate. This leads to evaporative cooling which is a rapid drop in temperature. Cold air is denser than warm air, so it falls and accelerates, creating an intense downdraft. The strong thunderstorm outflow only affects a limited area.

A derecho is a wind storm on a much larger scale. Most notable is the 4th of July Boundary Waters Blowdown of 1999. A derecho is associated with fast moving lines of thunderstorms. To qualify as a derecho, the winds must be at least >58 mph for the majority of a path spanning at least >240 miles. 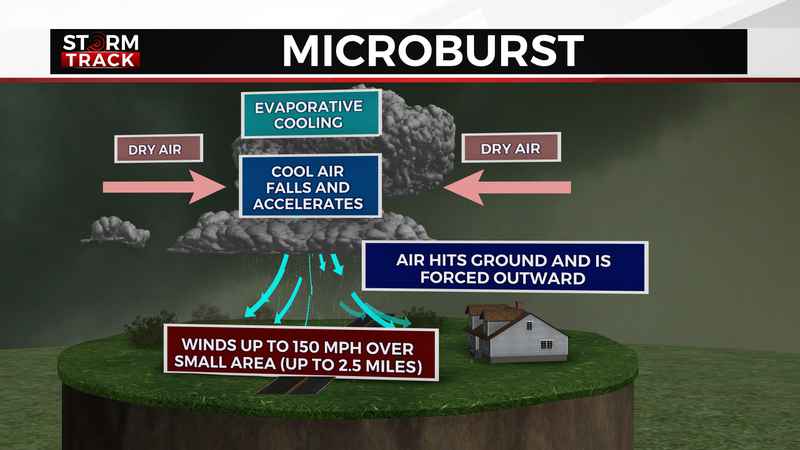 Damaging winds can be both dangerous and costly. That’s why it’s important to heed Severe Thunderstorm Warnings and seek shelter immediately when one is issued for your area.