US official: Russia setting up defenses outside Kyiv 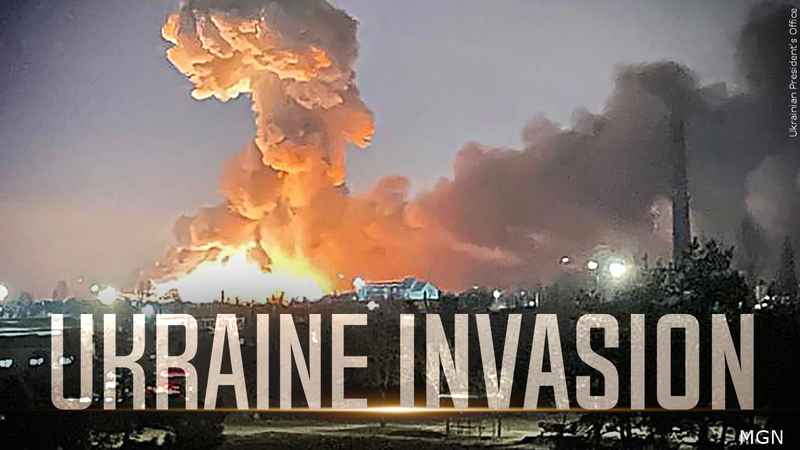 A senior U.S. defense official said Wednesday that Russian ground forces appear to be digging in and setting up defensive positions between 15-20 kilometers (9-12 miles) outside Kyiv, as they continue to make little to no progress moving toward the city center.

The official said it appears the forces are no longer trying to advance into the city and, in some cases east of Kyiv, Ukrainian troops have been able to push Russian soldiers further away. The official said Russian forces had been 20-30 kilometers (12-19 miles) away to the east and northeast, and are now about 55 kilometers (34 miles) away.

The official said that, instead, Russian troops are exerting more energy and effort in the eastern Donbas region, specifically in Luhansk and Donetsk. The official said the U.S. is seeing Russia prioritize the fight there, in what could be an effort to cut off any Ukrainian troops in those areas and prevent them from moving west to defend other cities.

The official spoke on condition of anonymity to discuss military assessments.

The official said the U.S. has seen some activity from Russian ships in the Sea of Azov, including what appears to be efforts to send landing ships ashore with supplies, including vehicles.

Air raid sirens wailed over the Ukrainian capital of Kyiv at dusk on Wednesday as the city remained under attack from Russian forces.

Barrages of shelling and loud gunfire rocked the city Wednesday, striking a shopping mall and high-rise buildings in the districts of Sviatoshynskyi and Shevchenkivskyi.

Mayor Vitali Klitschko said at least 264 civilians have been killed in the capital since war broke out.

Klitschko said Wednesday that battles were being waged in the area of Liutizh, a village 30 kilometers (about 20 miles) north of Kyiv and that Ukrainian forces have wrested back control of areas to the north-west and the north-east of the city, including most of Irpin.

He said the western town of Makariv has also been taken back by Ukranian troops.

A rush to purchase guns and train with them continued in the western Ukrainian city of Lviv on Wednesday.

Among the people lined up at a gun range was Ihor Oprysk, who said he hadn’t fired a gun since serving in the Soviet army.

“I bought a gun to see how it feels,” Oprysk said. “To (know how to) shoot nowadays is very important. You need to know about everything.”

Gun shop owner Zakhar Sluzhalyy said he had 700 kinds of weapons for sale before the Russian invasion and was now down to 40. Supply chain problems have made it difficult to restock the shop with guns.

All guns are best-sellers now, he said as an $800 Kalashnikov rifle adapted for civilian use sat on a counter in front of him.

The war has prompted officials to streamline the monthlong permitting process for gun purchases to two days, he said.

Dozens of volunteers filled sandbags and piled them on the back of trucks at a beach in the Black Sea port city of Odesa on Wednesday. Volunteers have been at the beach filling sandbags since the war began to build barricades around the city.

Merchant sea captain Sivak Vitaliy, 47, carried sandbags over each shoulder and said with a smile, “We win.”

The father of three daughters, Vitaliy said he had gathered clothes and other items from his apartment to donate to the war effort. With no money or anything else of value to give, he came to the beach Wednesday after learning of the volunteer effort there.

“Because they (Ukrainian army) are in their own land, they will not permit anybody to come and take their land and take their lives,” Vitaliy said. “No matter how bad the situation is in Mariupol, Kharkiv, it doesn’t matter. We will win.”