It may have been drizzling, but that didn’t stop Minnesota Vikings Pro Bowl fullback, CJ Ham, from hosting his 2022 youth football camp at the Duluth Public Schools football Field. Giving back to the Denfeld community where he grew up.

“It’s humbling, I love this community being raised here and everything Duluth has to offer that’s why it’s so important for me to come back. To hear that people are traveling hours to just be a part of this community and vibe means a lot to me. That’s what encourages me to keep coming back and do what I can,” said Ham.

This is the 3rd annual youth football camp that Ham has hosted in the Duluth area. Some families in attendance even traveling from out of town to participate.

“On the Iron Range we don’t have a lot of football players. So I think it’s encouraging kids to play sports, stay out of trouble, and just be a Vikings fan. My son is a huge Vikings fan as well, and CJ Ham is one of his favorites,” said Iron Range resident Christina Covier

The camp boasted over 170 kids between the ages of 6-14, as they compete in a variety of different drills, from tackling tires, running through cones, and just having fun. 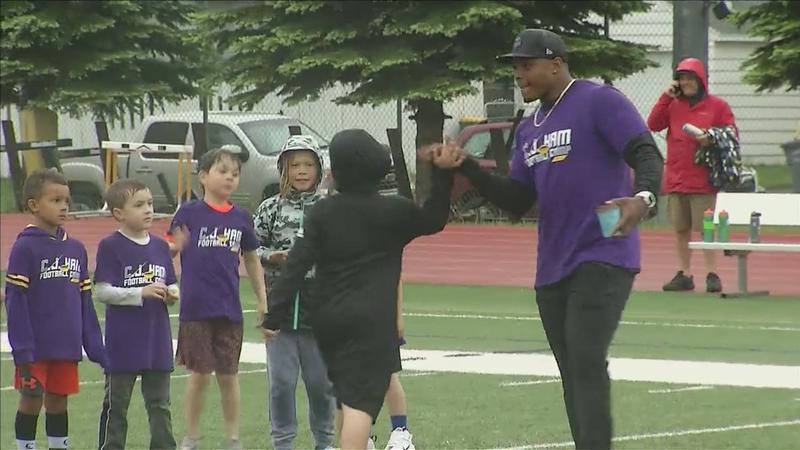 “I love it, Carter has been so excited he has been talking about it for about a month now. Oden is his brother and anything Carter does, Oden does so they are pretty excited boys today,” said Duluth native Mark Carlson.

All proceeds from the camp will support diversity and inclusion scholarships for underserved minority students, graduating from the Duluth area.

“I had a dream when I was a kid to play in the NFL. By the grace of God I was blessed to be able to do that, but it took a lot of hard work. There are a lot of doubters and people out there that say you can’t do it but you have to look within yourself. Find that drive, and I hope these kids today find that drive and no matter what’s in front of them they accomplish all their goals,” Ham concluded.