Hundreds of riders and a sold out crowd came out for the 67th Spooner Rodeo over the weekend.

Cowboys and cowgirls are the highlight of the event. However behind the scenes one former basketball star played a big part in helping all three days go off without a hitch.

Basketball and bulls. It’s not the NBA team in Chicago, but rather the two passions of Spooner Rodeo bullfighter Austin Tilton of Mitchell, South Dakota.

"We’re saving cowboys’ lives, bull riders, just doing whatever we can to make sure they’re safe out here," Tilton explained.

A standout on the collegiate courts the former guard would retire his jersey and pick up the reigns as a bullfighter, steering cowboys out of arenas and away from danger. 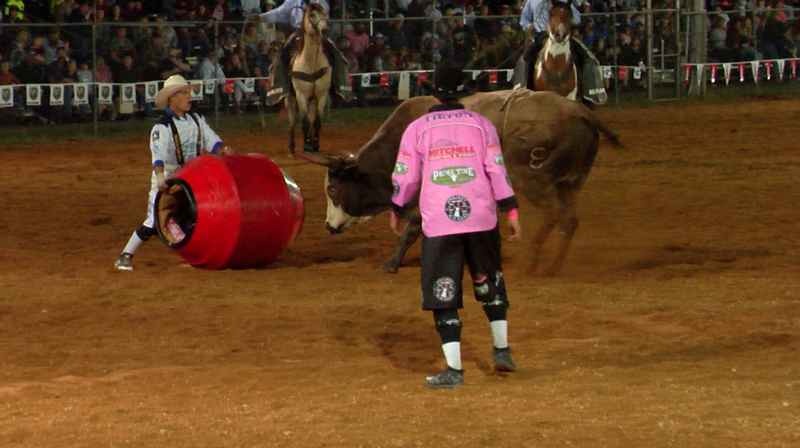 "This is a lot more intense," Tilton said. "More adrenaline and then obviously [you get in] a lot better shape. You’ve got to be in crazy good shape to do this kind of sport."

With nearly 400 competitors across three days of events, Tilton did have to spur into action on a handful of occasions.

"It’s our job to protect that guy in the can because he’s protecting us on the outside," Tilton said describing an event where a bull runs around a man in a barrel. "You got to go over there and lay that barrel down between him and that bull, and just make sure that guy is safe inside the barrel. Then we’re trying to pull that bull off of there so we can get everybody safe."

The event went smoothly, and everyone from announcers, to riders, to rodeo queens expressed gratitude for their return to the arena after a year off.

"It’s a big sigh of relief, we have come so far just to be here and I’m so excited," said Samantha Kennell, the 2021 Spooner Rodeo queen.

"We kind of took advantage of having time off," bull rider Cable Wareham said. "We got to practice a lot and fine tune a lot of things and now we’re able to use our talents again, so it’s nice."

Nikolas Swanson of Fairmont describe the festivities as, "super awesome and I liked it."