For 14 years Steve and Sandy Paulson have held the Breezy Point 5k right in their driveway on Island Lake. A small tradition which grew to have a massive impact, raising funds for the Minnesota Adult and Teen Challenge (MnTC).

“Started at a campfire 14 years ago. A few people from each cabin around here brought a few other people. We had 25 people, and we just ran it. Some walked it, some rode bikes and fast forward a couple of years, somebody said, hey, if we’re going to keep doing this, let’s pick a charity. So I chose Minnesota Teen Challenge. Last year we raised over $72,000 for them, and this year we’re hoping to break that record again. All in all, we’ve raised over $350,000 in my driveway for Teen Challenge,” said founder Steve Paulson.

Minnesota Adult & Teen Challenge has been around since 1983, and works as a drug and alcohol treatment and recovery program.

“Steve and Sandy Paulson have been doing this race for 14 years to raise money for our campus. We have to raise a lot of money to do the long term program to keep guys in treatment for 13 months. We literally couldn’t do what we get to do without supporters like them. It’s a really cool experience for our guys to come out here and see all the support firsthand in the driveway. It is 550 plus people here to support and cheer them,” said Center Director for MnTC Brandon Togerson.

The MnTC also has a total of 11 locations spread all around the state of Minnesota. For more information about the organization CLICK HERE. 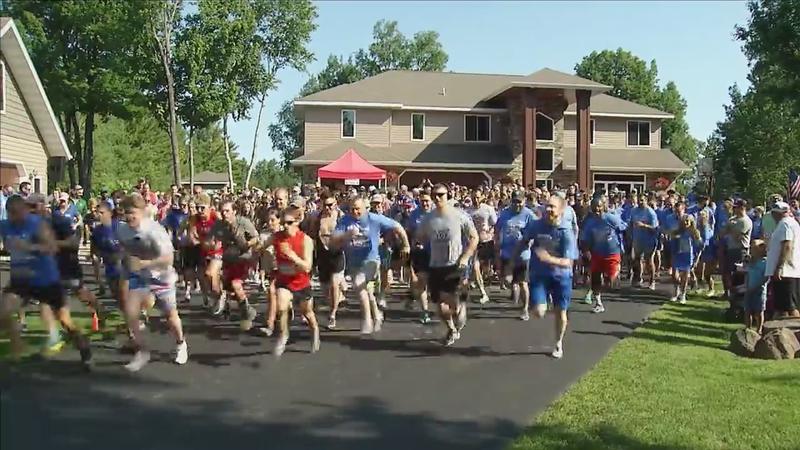 Runners take off from the starting line of the 2022 Breezy Point 5k last Saturday.[WDIO]

“They’re definitely in the fight for their lives and they’re taking this program seriously, and want to really make it their last time in treatment. We are cheering them on and they’re so full of talent and potential. These guys are amazing and we want them to make it. Freedom from addiction starts here, we always say,” continued Togerson.

For first time participant and female winner Lana Jendro, she was even moved to realize the event transcended just running.

“It’s the first time I’ve ever come to a 5k by boat so that was really cool. To see the growth in such a small community, that’s touching lives, it’s pretty remarkable. I feel honored to be a part of it,” concluded Jendro.