This Friday afternoon the University of Minnesota Duluth (UMD) women’s hockey team will once again face off against Northeastern University in the NCAA Women’s Ice Hockey Frozen Four.

The Bulldogs and Huskies met in last season’s Frozen Four semifinals as well, with UMD suffering the close 3-2 loss in overtime. However this year UMD’s squad is more experienced on the national stage, plus they’re riding momentum from a big 2-1 quarterfinal upset over the University of Minnesota Golden Gophers last Saturday.

"We have so much more confidence," Anna Klein said, a UMD fifth year forward. "Last year I think it was such a big deal to make it to the Frozen Four and this year we’re like ‘ah that’s not good enough’, we want to win the whole thing."

Senior forward Naomi Rogge added, "if we focus on ourselves, we know what we have here and we know that that is enough to win if we just come out with a game plan like we’re supposed to."

UMD will make the trek out East to University Park, Pennsylvania for the tournament. Puck drop between UMD (26-11-1) and Northeastern (31-4-2) in the Frozen Four semifinals is set for Friday at 2:30pm central time at the Pegula Ice Arena. 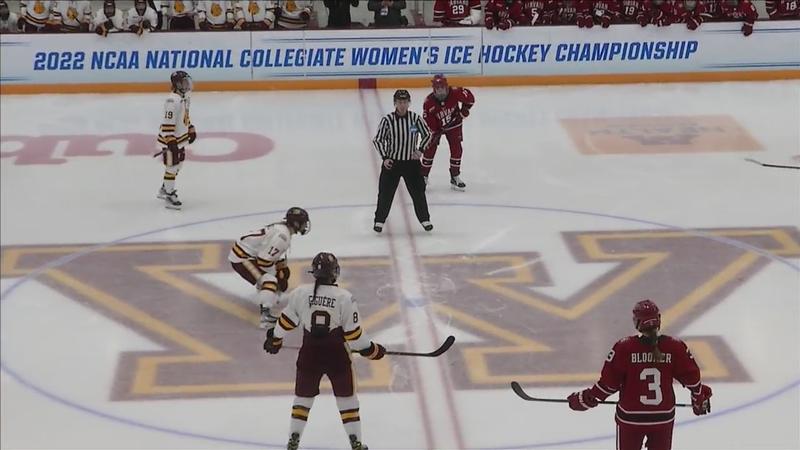 UMD prepares to face off against Harvard in the first round of the 2021-2022 NCAA women's ice hockey tournament at Ridder Arena.[WDIO/Alicia Tipcke]

The winner will play Ohio State or Yale for the NCAA championship Sunday at 3pm. For the full bracket, click here.