The University of Minnesota Duluth (UMD) men’s hockey team has landed in Loveland, Colorado ahead of their NCAA Men’s Ice Hockey regional first round game on Thursday.

Sweeping through the National Collegiate Hockey Conference (NCHC) Frozen Faceoff, the conference champion No. 6 Bulldogs feel ready for national tournament time where they’ll open up the action against No. 14 Michigan Technological University.

"My freshman year we kind of saw this was our toughest game, the first one, so there’s no bad teams," explained captain Noah Cates, a UMD senior forward. "Everyone is here for a reason and everyone is tough in their own ways, so you really got to be dialed in and focused every shift."

Meeting as programs for the first time since 2018, the match will also mark the first clash between a duo of Hermantown brothers. Bulldog sophomore Darian Gotz and Husky senior Eric Gotz will face off on opposite benches for a spot in the quarterfinals.

It’s UMD who carries the momentum into Thursday, riding four straight wins while Michigan Tech is coming off a loss in their conference semifinals. 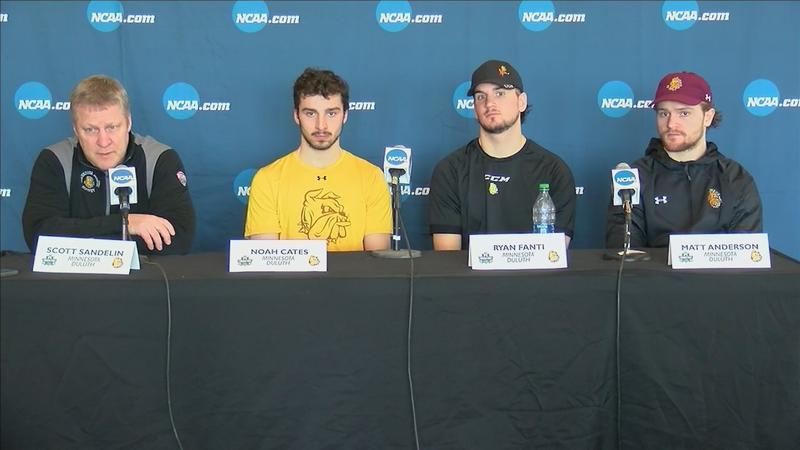 "They’ve done a lot of really good things over the year," head coach Scott Sandelin said about UMD. "Maybe we haven’t been as consistent as we want to be and right now I like where our mindset is. I like that we’ve got some confidence, I like that we’ve got a little momentum and we’ve got to use that moving forward here tomorrow."

Earning the second seed UMD, coming off back-to-back shutout wins, sits 21-15-4 while the third seeded Huskies hold a 21-12-3 overall record. Puck drop in the first round at Budwesier Events Center Thursday is set for 2pm.