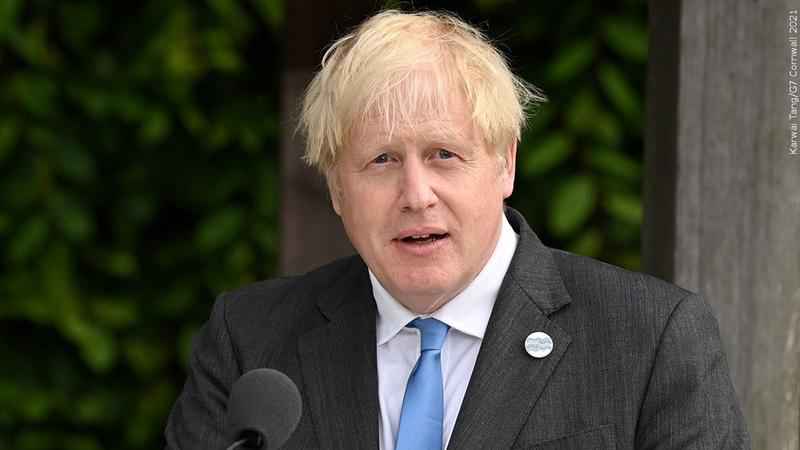 Boris Johnson, seen in 2021, is under fire for attending a party amid lockdown.[Karwai Tang/G7 Cornwall 2021]

Prime Minister Boris Johnson has apologized for attending a garden party during Britain’s first coronavirus lockdown, but brushed aside demands that he resign for breaching the rules his own government had imposed on the nation.

The apology Wednesday stopped short of admitting wrongdoing. It was Johnson’s attempt to assuage a tide of anger from the public and politicians after repeated accusations he and his staff flouted pandemic restrictions by socializing when it was banned.

The "partygate" scandal could become a tipping point for a leader who has weathered a series of other storms. Some members of Johnson’s governing Conservative Party are saying he must quit for breaking the rules.

Johnson has faced a wave of public and political outrage over the garden party in 2020 while Britons were barred by law from meeting up with more than one person outside their households.

Opposition politicians called for a police investigation after broadcaster ITV published a leaked email invitation to "socially distanced drinks" in the garden of the prime minister’s Downing Street office and residence.

The event was scheduled for May 20, 2020. That day the government held a televised news conference to remind people that group gatherings were banned indoors and out.

The allegations are just the latest claims of wrongdoing to rattle the leader. Cases of rule-bending and dishonesty have followed Johnson through his twin careers as journalist and politician.

He was once fired from a newspaper for making up a quote, and later ousted from a Conservative Party post for lying about an extramarital affair.

He has always bounced back. But now discontent is growing inside Johnson’s own Conservative Party over a leader often accused of acting as if rules don’t apply to him.