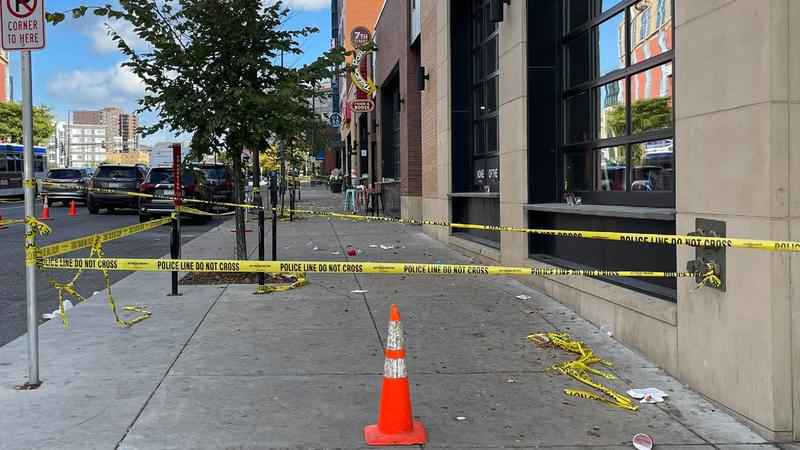 Police tape blocks off Seventh Street Truck Park, where 15 people were shot and a woman were killed on Sunday, Oct. 10, 2021[Photo: Brittney Ermon/KSTP]

ST. PAUL, Minn. – Authorities have released the name of a 27-year-old woman who was killed in a weekend shootout at a busy St. Paul bar. Police say Marquisha Wiley was killed early Sunday when gunfire broke out at the Seventh Street Truck Park bar. Fourteen other people, including three suspects, were wounded and are expected to survive.

According to Hubbard Broadcasting’s KSTP-TV, two suspects have been charged with a dozen felonies each in connection with a shootout that killed a woman and injured 14 others early Sunday morning in St. Paul’s entertainment district.

According to a criminal complaint, police responded to a report of a shooting at Seventh Street Truck Park at 214 West Seventh Street around 12:15 a.m. When officers arrived, they encountered a "chaotic scene" with multiple people who had been shot. The complaint states 12 gunshot victims were taken to hospitals in the area.

A woman, who family have identified as 27-year-old Marquisha Wiley, was being carried with a gunshot wound to her back, the complaint states. She was not moving. Officers briefly found a pulse, but it disappeared after a few seconds. A medic pronounced her dead minutes later.

The two men who matched the description of the shooters, Brown and Phillips, were taken into custody. Police said they were being treated for gunshot wounds at the hospital and would be booked into the Ramsey County Jail once they were discharged.

A judge ordered Brown and Phillips to be held on $10 million bail each.

The suspects had not been charged by early Monday. Authorities were still investigating what led to the shootout.