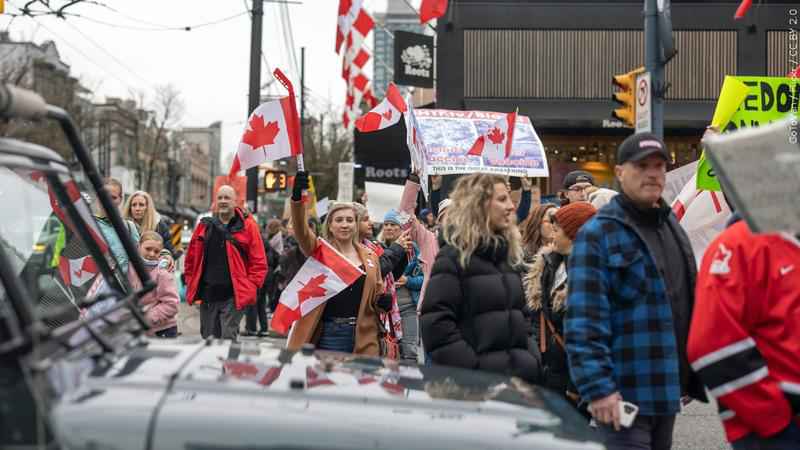 Large crowds of truckers and protesters gather for the opposition of the COVID-19 vaccine mandate in Canada, Photo Date: 02/05/2022[GoToVan / Flickr / CC BY 2.0 ]

OTTAWA, Ontario (AP) —Canadian Prime Minister Justin Trudeau is invoking emergency powers to weaken the protests by demonstrators who are paralyzing the capital city of Ottawa and blocking border crossings. The protests over the country’s COVID-19 restrictions have been raging for more than two weeks.

Trudeau’s move on Monday to invoke the Emergencies Act gives the federal government broad powers to restore order. He said Monday the emergency measures “will be time-limited, geographically targeted, as well as reasonable and proportionate to the threats.” But one of the protest organizers in Ottawa is vowing not to back down in the face of pressure from the government.

For the past two weeks, hundreds and sometimes thousands of protesters in trucks and other vehicles have clogged the streets of Ottawa, the capital, railing against vaccine mandates and other virus precautions and condemning Trudeau’s Liberal government.

The busiest U.S.-Canada border crossing reopened Sunday after protests against COVID-19 restrictions closed it for almost a week. Detroit International Bridge Co. said in a statement late Sunday that “the Ambassador Bridge is now fully open allowing the free flow of commerce between the Canada and US economies once again.”

The crossing normally carries 25% of all trade between the two countries, and the blockade on the Canadian side had disrupted business in both countries.

The protest in Ottawa has paralyzed downtown, infuriated residents who are fed up with police inaction and turned up pressure on Prime Minister Justin Trudeau.