Touchdowns and the Northwestern Tigers football team goes together like PB&J.

Last season they scored 28 TDs, however missed out on claiming the Heart O’ North Conference title.

On Tuesday they kicked off their first week of practice for the 2021 season. By Friday they were suited up in pads, and gearing up to fight to reclaim their conference championship.

"It’s great to be back in full pads. Last year we didn’t get these two-a-days, so we weren’t out here at all during August. We just got right into the season right away, so it feels nice to be back in pads for practice for once," said Nicholas Makela, a middle linebacker and wide receiver for the Tigers. "This year should be a good year, hoping to bring back to an undefeated season again."

Head coach Jovin Kroll said this is the biggest team with the most depth, and skilled receivers, he’s ever had at Northwestern. 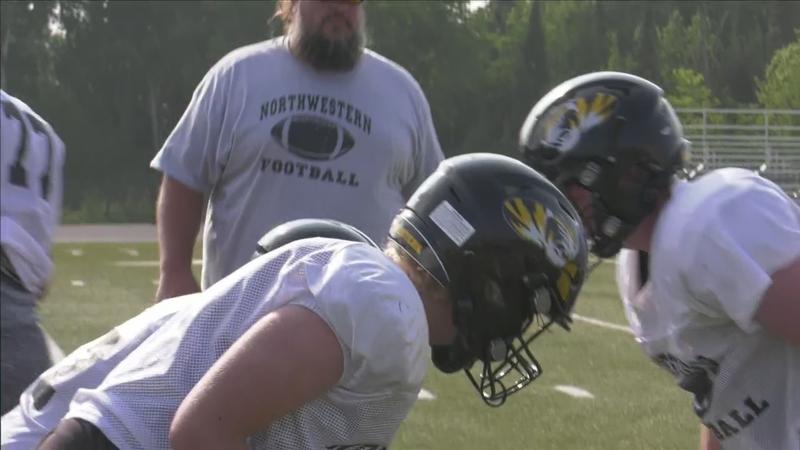 On his "breakout season" watch list is full back Greg Ohman, and outside linebacker and top edge rusher Austin Schlies.

They’re among around 30 upperclassmen fighting for starting positions.

They’ll first put their skills to the test in Northwestern’s season opener against Ashland. It will mark the two programs first meeting since 2018.

"It was such a regular thing for decades and decades," said Kroll regarding their old Oredocker rivalry. "Then suiting sophomores through seniors, there’s not a kid on our roster who’s suited up for an Ashland-Northwestern game."

Despite that, his team feels ready. "We’re preparing really well," said Schlies. "Great O-line going right now, our plays are looking smooth, and then our defense has just been stronger than ever."

The Tigers are set to kickoff in Ashland on August 20th at 7pm.