After four years of major reconstruction, the main road through downtown Duluth will fully reopen for good by the end of the day Friday.

The $31.5 million project rebuilt more than 11 blocks of Superior Street between Mesaba Avene and 4th Avenue East. It was originally scheduled to take three years, with reopenings every winter and for Grandma’s Marathon, but stretched into a fourth summer due to weather an unexpected discoveries below the surface.

"We found everything from trolley tracks to vaults that were never documented – our team learned a lot from this project," Duncan Schwenson, City of Duluth Senior Engineer and lead on the project, said in a news release.

The project included removing bricks from the street surface, replacing utilities that dated back to the 1880s, and converting a 1932 heating system from steam to hot water.

In a news release, Mayor Emily Larson said the project required the patience of the downtown community, financial investments, and a vision for a sustainable future. 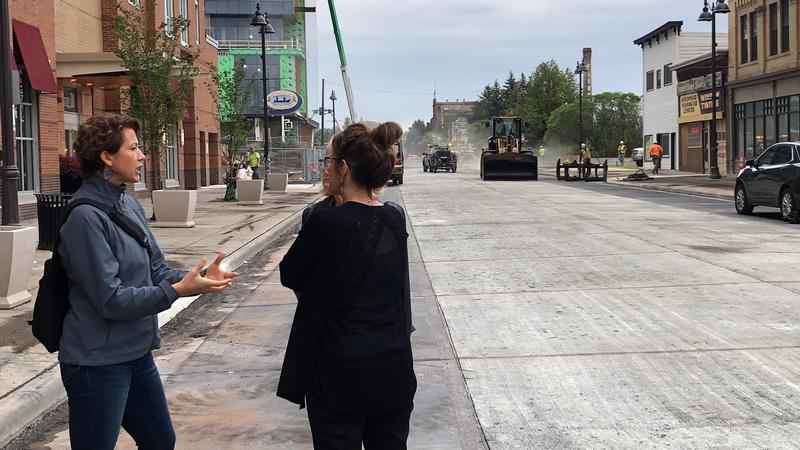 Mayor Larson spoke to members of the downtown business community as workers put the final touches on the Superior Street project Friday.[WDIO-TV]

"It’s all a part of our new downtown. I’m thrilled today for our entire community. We’re a city on the rise, and we’re poised for a generation of success," Larson said.

"While it’s never easy for our businesses to have construction out their front door, they now have a transformed main street with new infrastructure and amenities. It will be such a milestone to see the last of the barricades removed and watch traffic freely flow to all of our businesses along Superior Street," Kristi Stokes, president of the Greater Downtown Council, said in the news release.

Larson praised Workforce Development, Northland Constructors, and subcontractors for giving work to people of color, low-income workers, people who have and are experiencing homelessness, and at-risk youth during the construction.