Michigan’s two U.S. Senators say construction of a new lock at Sault Ste. Marie could be completed as much as two years ahead of schedule thanks to new federal funding.

The Biden administration announced Wednesday that the Army Corps of Engineers will use more than $470 million from the Infrastructure Investment and Jobs Act to fund construction of the new lock, representing the final piece of funding needed by the Corps. The lock’s total cost is $1.3 billion.

The Soo Locks offer the only water connection between Lake Superior and the other Great Lakes and are used by ships carrying taconite from Minnesota and Michigan’s Upper Peninsula to ten steel mills on the lower Great Lakes.

Only one of the four locks at the site — the Poe Lock — is big enough to accommodate vessels longer than 800 feet. The Corps says the Poe Lock currently handles 85% of the commodity tonnage travelling through the Soo Locks.

"The new Lock at the Soo will provide much needed resiliency in the Great Lakes Navigation System," Kevin McDaniels, the Corps’ Detroit District Deputy District Engineer, said in a news release. 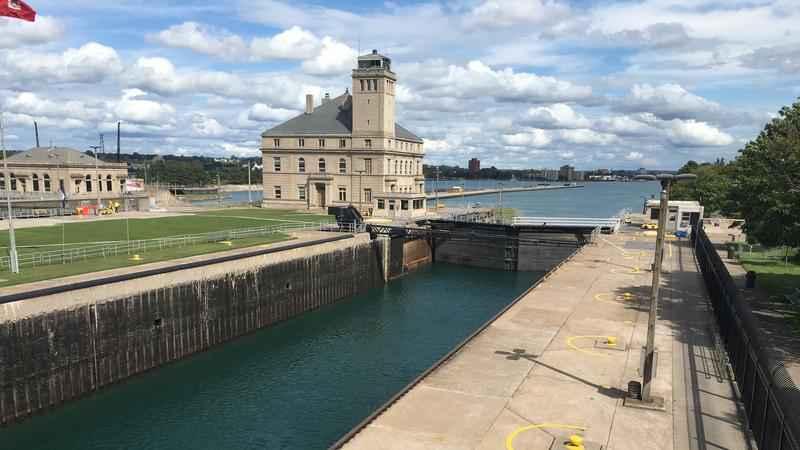 The new lock will be built north of the Poe and MacArthur locks.[Jon Ellis/WDIO-TV, file]

"It will eliminate the single point of failure in our nation’s iron ore supply chain," he said.

Leaders have been fighting for a new lock for decades, saying it’s needed in case of a Poe Lock failure. Gov. Gretchen Whitmer says the new lock will protect tens of thousands of jobs.

"The locks are critical to facilitating trade and economic cooperation between our two peninsulas and Great Lakes neighbors," Whitmer said in a news release.

"In Michigan, we know how vital the Locks are to our economy and our national defense. We also know that we are on borrowed time until something happens that shuts them down. Thanks to our bipartisan efforts in Congress, and with the President’s leadership, we are able to finish this project as soon as possible," Sen. Debbie Stabenow said in a news release.

Sen. Gary Peters pointed out that some of the pumps at the locks are more than 100 years old and called the investment "long overdue."

The new lock will be the same size as the Poe Lock, which is 110 feet wide and 1,200 feet long and was completed in 1968. It will replace the smaller Sabin and Davis locks. The Sabin Lock has been out of service since 1989 and the Davis Lock hasn’t been used commercially since 2011.

Preliminary work has already been underway, including work to deepen the upstream channel last year.

The fourth lock at the site, the MacArthur Lock, will remain in place. It is 80 feet wide and 800 feet long and was completed in 1943.

The MacArthur Lock is the one most familiar to visitors because it is next to a public viewing platform. The Poe Lock is north of the MacArthur Lock, and the new lock will be constructed in the North Canal north of both existing locks.